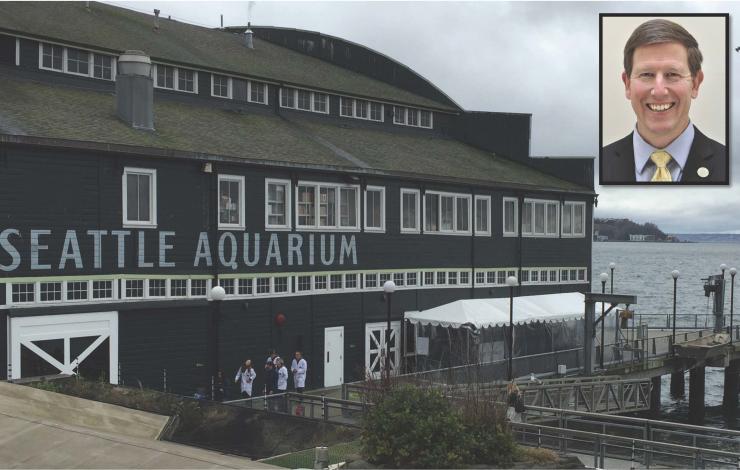 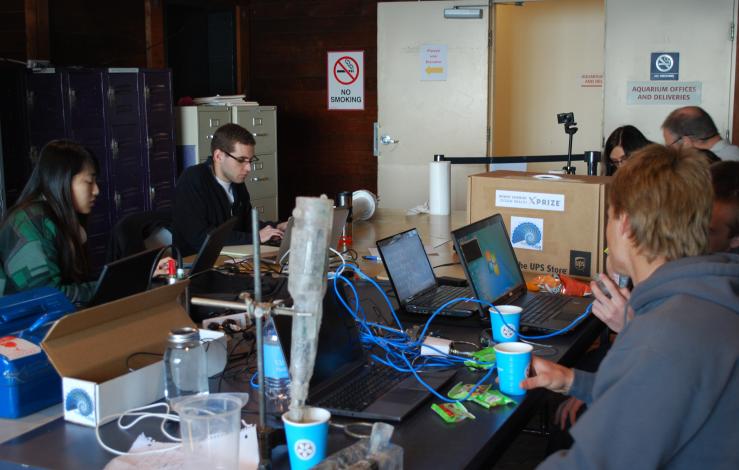 Philippe Cousteau joined researchers from PMEL and UW/JISAO at the Seattle Aquarium, where Phase 3 of the Wendy Schmidt Ocean Health XPRIZE contest was wrapping up this weekend. Following one month of data collection, the 14 teams' pH sensors were removed from a flow tank filled with Puget Sound seawater, and the data were downloaded.

The $2M Ocean Health XPRIZE is a competition to create accurate and affordable pH sensors that can be used around the globe. The development of this technology, which will help scientists map and characterize ocean chemistry globally, is of utmost importance as ocean acidification (a change in seawater chemistry resulting from CO2 absorption) is expected to impact the health of a number of vulnerable ecosystems around the world including coral reefs, shellfish, and fisheries.

The age of Arctic sea ice can be determined using satellite observations and drifting buoy records to track the movement of ice floes, and can be a rough indicator for ice thickness.

This NOAA PMEL animation shows the age of the ice at the end of each winter since 1987. Paler colors indicate older ice, with light blue indicating 4-year ice to white indicating very old ice.

In the 1980’s, 26% of the Arctic winter ice pack consisted of thick ice built up over multiple years. After 2007, older ice diminishes rapidly and is replaced by younger ice. Starting in 2011, very old ice remains only along the Canadian coast.

At the end of winter 2014, only 10% of the ice pack was old ice, less than half the amount in the early 1980’s, and very old ice has become more rare. Learn more about Arctic Sea ice in 2014 in the Sea Ice article in the 2014 Arctic Report Card and visit PMEL's Arctic Research Page.

The Submarine Ring of Fire ’14 cruise is completed and PMEL scientists are back in the lab analyzing the data.  While underway, 19 short videos were created by Saskia Madlener with music by Charlie Brooks.  Take a look at the videos to get a sense of what life on the ship was like and how the scientists dealt with successes and challenges at sea.   Despite problematic weather, the scientists were able to get biological, chemical, geological and acoustic data over the duration of the cruise, using hydrographic instruments and the remotely operated vehicle Jason.

The NOAA-led Arctic Report Card was released today. The annual assessment of change in the Arctic shows the region continues to outpace the rest of the globe in response to climate change, warming at twice the rate of anywhere else on earth.

Read the NOAA press release and visit the Arctic Report Card: Update for 2014.

PMEL Scientists return to the Submarine Ring of Fire 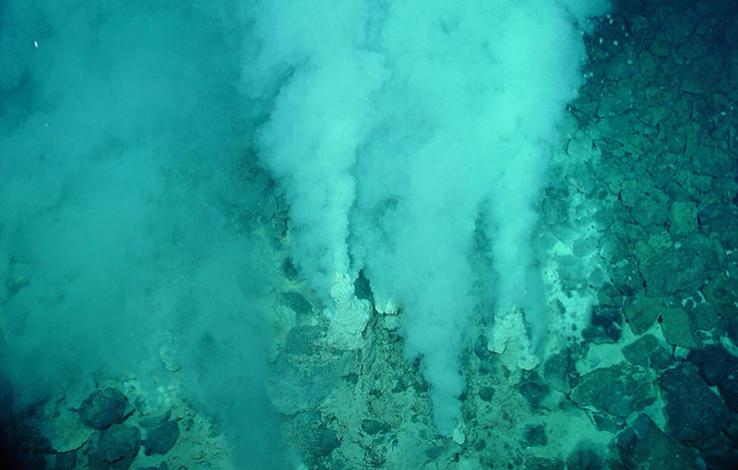 On November 29th, 2014, 11 PMEL, JISAO, and CIMRS scientists embarked on an exciting journey aboard the R/V Roger Revelle to revisit the Submarine Ring of Fire. Located west of the Mariana trench, the mission will visit NW Eifuku and NW Rota, two active hydrothermal systems where scientists will examine the emission of carbon dioxide as it provides a natural laboratory to observe and measure how ocean acidification can affect marine ecosystems.  The cruise is funded by NSF and NOAA's Ocean Exploration and Research program.

Follow along with the scientists on the Ocean Explorer website where mission logs will be updated regularly.

Deep Sea Research Part II just published a special issue on research in the Bering Sea.   Ten PMEL and Joint Institute for the Study of Atmosphere and Ocean scientists contributed to this issue.  The Bering Sea Project: Volume III documents the findings of six years of research and the partnership of two ecosystem programs.

The NSF-funded Bering Ecosystem Study (BEST) and the NPRB-funded Bering Sea Integrated Ecosystem Research Program (BSIERP), with in-kind contributions from NOAA and the US Fish and Wildlife Service, have shed light on ecosystem dynamics and how the region may respond to climate change.  In particular, researchers found that when and where the sea ice extends are major factors that determine productivity and impact the entire ecosystem of the Bering Sea.   To find out more information about these exciting programs, visit the EcoFOCI and BEST-BSIERP websites. 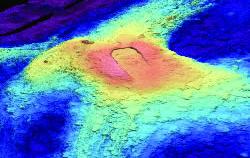 Large Phytoplankton Bloom Persists for Months in the Bering Sea 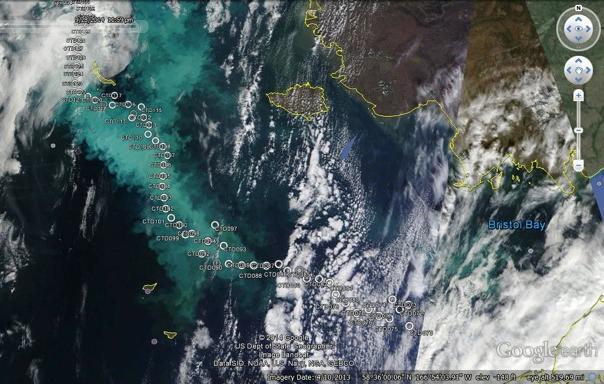 PMEL and Alaska Fisheries Science Center scientists have observed and sampled a large coccolithophore bloom, viewable even from space, in the Eastern Bering Sea during a recent October EcoFOCI research cruise.  This phytoplankton bloom is caused by the coccolithophore, Emiliania huxleyi, a one-celled marine algae with calcite plating, and has persisted for nearly three months, starting in July 2014.  Blooms of this size and duration have not been seen for over a decade in the Bering Sea.

PMEL and JISAO Taking Flight Over the Arctic 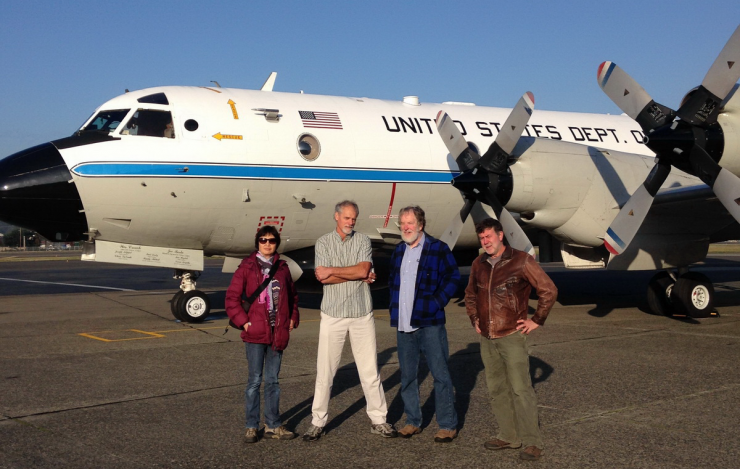 Scientists from PMEL and JISAO took off on NOAA’s Hurricane Hunter P3 aircraft on October 2 from Seattle, Washington heading to Fairbanks, Alaska to take part in 5 flight missions to measure heat flux coming from the Arctic Ocean. This is the second year in a row scientists have flown above Arctic waters.  Data gathered from both years to test the hypothesis that increased summer heat storage in the newly sea-ice free ocean regions in the Arctic lead to surface heat fluxes in autumn that are large enough to have impacts on atmospheric temperature, humidity, wind and cloud distributions.

This project has been jointly funded by the Office of Naval Research (ONR) and NOAA, and includes both aircraft and ship operations.  To learn more about NOAA's research in the Arctic, visit http://www.arctic.noaa.gov/.