Large Atlantic...
From August 2013 to February 2014, PMEL scientists and techni

New Study Shows...
In a paper published February 27 at the

Oceans and Coastal Processes Research captures those elements of PMEL's integrated research agenda that do not fall easily into the broad categories of climate or ecosystems, but still comprise important contributions to NOAA's mission.  Elements captured in this theme include an understanding of ocean physics and interactions between the ocean and both the seafloor and atmosphere.

NOAA Center for Tsunami Research (NCTR) - This PMEL group is developing and testing new and improved modeling capabilities for both real-time tsunami forecast, for use during tsunami warning operations, and community-based tsunami hazard assessment efforts. New generation tsunami models will provide estimates of currents resulting from tsunamis in ports and harbors, and incorporate the stage of the tide into predictions to increase timeliness and accuracy of tsunami forecasts.

Ocean Tracer - They make chlorofluorocarbon (CFC) and SF6 measurements on Repeat Hydrography and other ocean research cruises to detect changes in water mass formation rates and to improve estimates of the uptake and storage of anthropogenic CO2 in the ocean on a global scale.

Earth-Ocean Interactions (EOI) - EOI operates a helium isotope laboratory that has analyzed several thousand deep ocean samples for helium isotopes, many of them as part of the World Ocean Circulation Experiment (WOCE) tracer project.  In the deep ocean, the conservative tracer helium-3 3He has been extremely useful for delineating the patterns of mixing and circulation for detection of volcanic gases and submarine hydrothermal fluids.  The group also engages in collaborative ocean exploration and research with NOAA's Ocean Exploration and Research Program office. 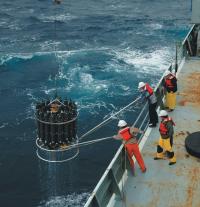 A CTD rosette is used to collect water then used to measure for ocean tracers like CFC.