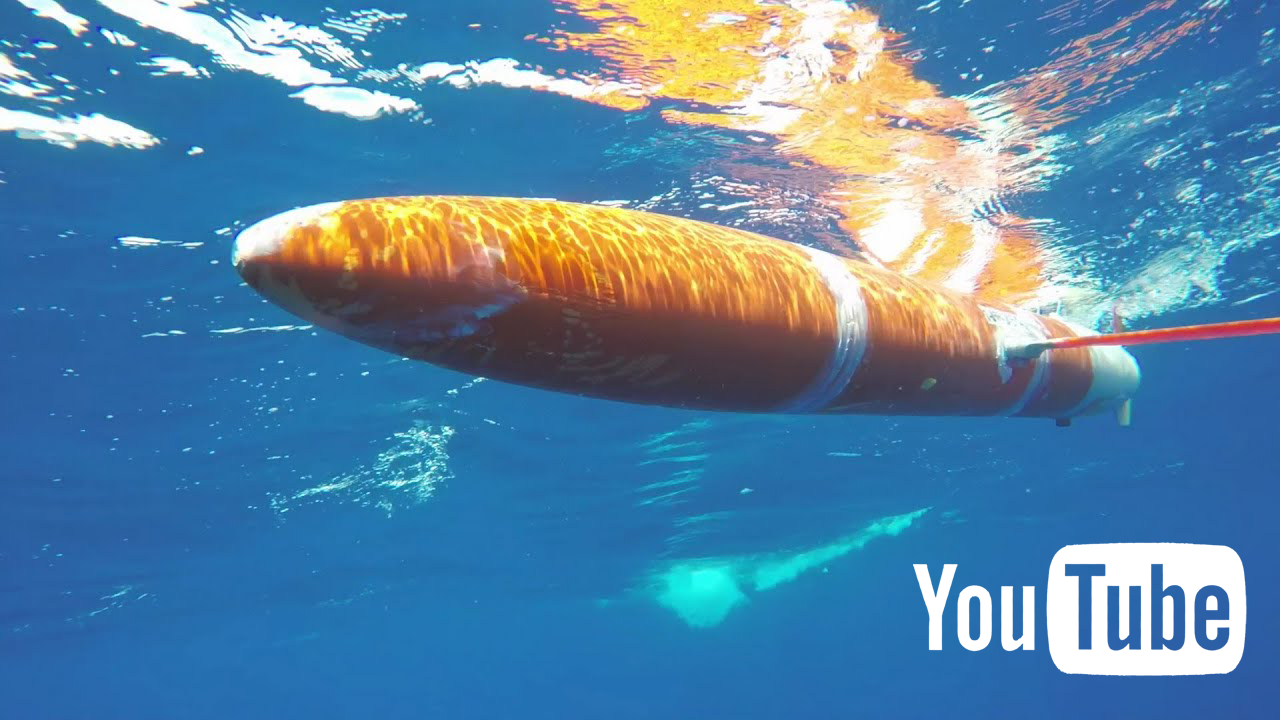 The Solomon Sea in the southwest Pacific is the main pathway for South Pacific water to reach the equator. Even though the Sea is small, it carries a very large flow (about 20Sv, comparable to other major ocean currents), with the amount varying seasonally and with El Niño/La Niña (ENSO). This is important because changes to either the temperature or amount of water arriving at the equator have the potential to modulate the ENSO cycle and thereby produce basin-scale climate effects.

While this basic picture has been inferred from water properties and numerical model experiments, measurements in the Solomon Sea have been sparse and difficult. The region is remote, with little infrastructure, and the large variability of its strong narrow currents in a complex-shaped basin with many islands and channels (see map below) pose serious sampling challenges. Until ocean gliders were developed in the early 2000s, there was no practical way to monitor this system. Since 2007, our group has collaborated with researchers from the Scripps Institution of Oceanography in California to make regular glider crossings of the Solomon Sea, measuring the temperature, salinity and velocity from coast to coast and from the surface to 1000m depth. On these pages we provide analyzed data from 136 crossings, for a total of almost 25,000 glider dives covering more than 116,000 km. A few illustrative plots are shown on the Data page; this work is discussed in several papers (Davis et al. 2012; Kessler et al. 2019).

The Spray glider (see photo) used here was invented by the Instrument Development Group (IDG) at Scripps (Sherman et al. 2001). Spray is 2 meters long, weighing about 50kg, thus it can be deployed and recovered by two people working on small local boats. All gliders used in this project were built by IDG, and our operations (out of Gizo, Solomon Islands) are conducted by Kessler with IDG field engineers, until the covid pandemic paused our deployments in March 2020. The work has been supported by NOAA's Global Ocean Monitoring and Observing program. 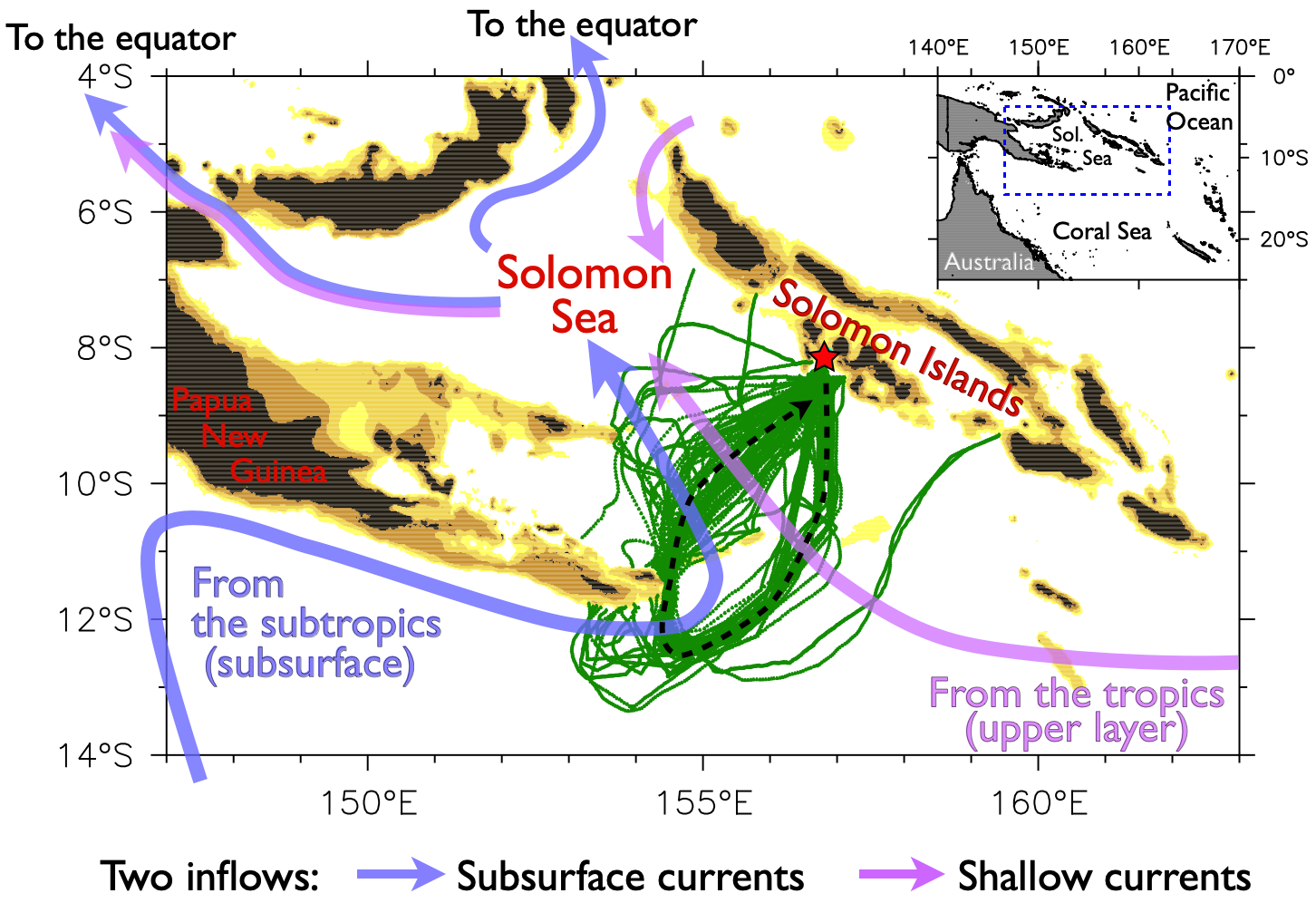 Schematic map of the geography and currents of the Solomon Sea in the southwest Pacific Ocean. Black is land, yellow and brown colors are shallow reef systems: Even though the Solomon chain has large gaps between the islands, from the ocean circulation point of view it is effectively a single island from 10°S to 5°S. Schematic currents are shown in pink (shallow currents) and lavender (subsurface currents). The glider dives are the green dots (about 17,000). The red star is our operating base in Gizo, Solomon Islands, and we navigate the glider clockwise around the roughly oval pathway suggested by the black dashed line. This is necessary because the very strong northwestward currents require that the glider starts out by gaining some maneuvering room before being swept downstream. A round trip across the Sea takes about 6 weeks.

How a glider works

Gliders are autonomous battery-powered instruments that operate independently for up to about 5 months. Gliders make it possible to monitor conditions in remote ocean regions that would be difficult to measure from ships, and they can remain in a region much longer than a research ship. Being small (2 meters long) and relatively light (50kg) they can be managed by two people and launched from local boats, making them much cheaper and more flexible than shipboard sampling.

Gliders have no forward propulsion, which would be power-hungry. They move by pumping mineral oil in and out of the pressure case to fill and empty external rubber bladders, making themselves more or less buoyant. Carefully balanced, the buoyancy changes cause them to rise and sink in the ocean. (This is similar to Argo floats). Gliders convert this vertical motion into forward speed by sliding their internal battery packs to pitch the nose up and down so they glide forward on their wings. Thus they are truly gliders. They bank to steer, without a rudder. Glider speeds are slow, about 25km/day (slower than a human swimmer) but they can operate for months on a set of batteries and cover thousands of kilometers in a mission.

A typical glider dive is to 1000m depth, covering about 5km in about 5 hours. They measure temperature and salinity, and infer the ocean current velocity by the difference between their observed displacement during a dive and the displacement predicted by a carefully-calibrated flight model that takes into account their orientation in the water (see the Appendix to Davis et al. 2012). Each time the glider surfaces, it finds its position by GPS, sends off the data by Iridium (satellite) telephone, asks for any revised instructions, and dives again. Much of the navigation is controlled internally. Rather than "steer" it, we send it waypoints; in the open ocean those can be hundreds of kilometers ahead. Every time the glider surfaces, the onboard computer figures out if the currents are pushing it right or left of the assigned course, and on the next dives tries to correct by aiming into the current. In very strong currents or near coasts we might need to adjust the course frequently but most of the time a glider navigates itself.