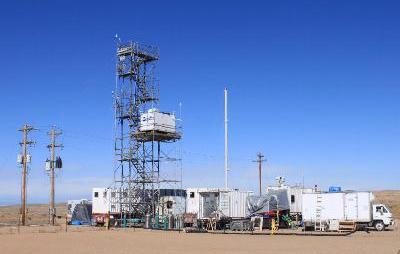 PMEL’s Atmospheric Chemistry group will be in Utah from January 24 through February participating in the second year of the Utah Air Quality Study to determine what is causing high levels of ozone during winter in the oil and gas production fields in Utah.  PMEL’s role is to measure properties of atmospheric particles and snow, including chemical composition, to assess their role in ozone production.

To find out more information about this study please visit the Atmospheric Chemistry web site.

PMEL technicians departed the week of January 7 for a 7-week cruise on the NOAA Ship Ronald H.Brown in the Northeast Atlantic to service moorings in the Prediction and Research Moored Array in the Atlantic (PIRATA).  PMEL will be deploying 5 moorings at 4 PIRATA sites.

The PIRATA array was established in 1997 in partnership with France and Brazil and studies ocean-atmosphere interactions in the tropical Atlantic.  Visit the PIRATA web page for more information.

PMEL currently has 476 active Argo floats mostly in the Pacific Ocean, making up 13% of the worldwide array.  You can find out more about PMEL’s Argo floats and where they are located on their website.

The Arctic region continued to break records in 2012 - among them, the loss of summer sea ice, late spring snow cover, and melting of the Greenland ice sheet - as the region settles into a new state. This was true even though air temperatures in the Arctic were unremarkable relative to the last decade.

Major findings include record lows in snow and Arctic sea ice extent, record setting glacier and Greenland ice sheet melt, and greening of the tundra, with varied impacts on marine and terrestrial ecosystems.

In a study published November 25 online in Nature Geoscience, PMEL's Dr. Nina Bednarsek and co-authors describes the first evidence of anthropogenic carbon dioxide dissolving the shells of marine snails, known as pteropods, in the Southern Ocean.   These findings, discovered during a 2008 science cruise, are some of the first documenting the impacts of ocean acidification on marine organisms in their natural environment.

Scientists at NOAA’s Center for Tsunami Research at PMEL modeled the most recent tsunami event at the end of October.  On October 27 a 7.7 magnitude earthquake struck off the coast of British Columbia and sent measurable tsunami waves across the Pacific Ocean.  Tsunami wave size and arrival times were accurately predicted for many U.S. coastline communities thanks in part to PMEL’s tsunami forecast model and tsunami detection buoys (DART®).  Scientists will use this data to help further refine their models to assist with future tsunami events.

PMEL Helps Reconstruct the Historical Climate of the Arctic

JISAO scientist, Dr. Kevin Wood, along with NOAA and the U.S. National Archives are teaming with Old Weather and thousands of citizen volunteers to transcribe climate data from historical ship logbooks into modern digital formats that can be used to extend modern global climate data sets to earlier times in order to better understand the climate of today.

Visit the new Arctic Rediscovery website which includes a gallery of photos revealing fascinating details of life on historical ships in the Bering Sea/Arctic, related student projects, and other resources.

A study led by PMEL's Dr James Overland, published in the October 10 issue of Geophysical Research Letters, shows how changes in summer Arctic wind patterns contribute not only to unprecedented loss of Arctic sea ice, but could also bring about shifts in North American and European weather.

Dr. Overland and others shows a change in the summer Arctic wind pattern over the past six years when compared to patterns for the previous 20 years.  For more information see the NOAA press release.

PMEL engineers have successfully deployed two moorings in the Atlantic Ocean as part of NASA’s multi-year Salinity Processes in the Upper Ocean Regional Study (SPURS).  The moorings are the first to a PMEL invented device, called a prawler that crawls up and down the mooring line measuring temperature and salinity along the way.  The prawler, about the size of a paint can, will measure the upper 1,600 feet of the ocean and uses wave energy to crawl back to the top to begin another profile.

For more information see the YouTube video above and read the ‘Prawling’ around in the Atlantic news story.

PMEL’s Dr. Bob Embley and JISAO’s Dr. Joe Resing will lead an expedition back to the NE Lau Basin near Fiji to map hydrothermal sites and re-visit the explosive West Mata volcano.  Discovered in 2008, the West Mata volcano is the deepest active underwater volcano ever caught on film (watch how it was discovered in the YouTube video above).

You can follow along with the expedition on NOAA’s Ocean Explorer website from September 9-26, which includes daily logs and a live feed from the seafloor.