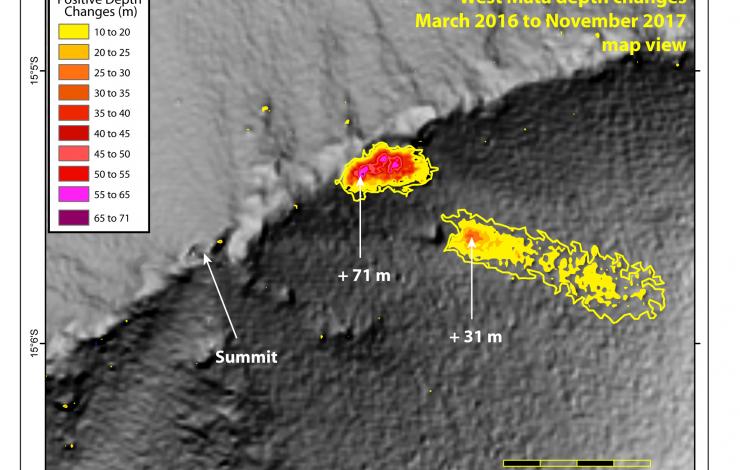 Two large volcanic cones and associated deposits near the volcano's summit. Red-pink areas are the thickest depth changes between bathymetric surveys in 2016-2017. Graphic by Susan Merle.

November 10 - December 18: Nine PMEL scientists from the Earth-Ocean Interactions (EOI) Program are studying the submarine volcanoes in the southwest Pacific Ocean aboard the Schmidt Ocean Institute's R/V Falkor on an expedition being led by Dr. Ken Rubin of the University of Hawaii.  Major support for the expedition is from NOAA’s Ocean Exploration and Research Program.

The Falkor and the science team are in the Northeast Lau Basin off of Tonga, a region known to have a very high density of submarine volcanoes. It is estimated that there are 30 discrete volcanoes in a 50 X 50 km area. During the two-part cruise, they will be using the Autonomous Underwater Vehicle (AUV) Sentry to generate high resolution bathymetric maps of the area and then later explore these areas with the Remotely Operated Vehicle (ROV) SuBastain.

In 2008 at West Mata seamount, water column data showed strong evidence of an active eruption which was later confirmed with an ROV response cruise in 2009. West Mata represents an extraordinary opportunity to learn about the interactions between the earth and the deep ocean that can have important impacts on ocean geochemistry and marine ecosystems. And with West Mata’s frequent activity, there is always a chance that they will be lucky enough to catch it erupting again.

The team is already finding evidence for two new eruption sites at West Mata seamount since March 2016, in addition to 5 other recent eruption sites between 2009-2016.  This makes West Mata one of the most active submarine volcanoes known on the planet.

Follow along with the cruise logs, read more about the expedition, and meet the science crew at Schmidt Ocean Institute’s web site: Underwater Fire: Studying the Submarine Volcanoes of Tonga