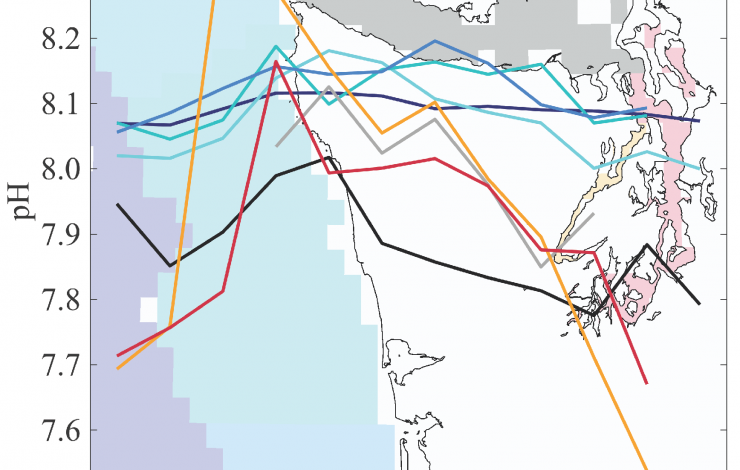 The northern California Current and Salish Sea ecosystems are hotspots for acidified ocean conditions, which are impacting many marine organisms and intensifying due to on-going ocean acidification. “Ocean acidification” (OA) refers to the global absorption of human-released carbon dioxide by the ocean’s surface, which in turn results in chemical changes including increased acidity (reflected by long-term declines in average pH levels) and reduced concentrations of carbonate ions (relevant to the stability of calcium carbonate shells or skeletons made by organisms such as oysters, clams, and corals). OA interacts with additional local pollutants and natural processes such as human-caused nutrient inputs to coastal systems or seasonal wind-driven “upwelling” of deep CO2 and nutrient-rich seawater onto the continental shelf and into the Salish Sea, respectively. Legal mandates, such as the U.S. Clean Water Act, require states to assess patterns in water quality related to acidity (pH) within state coastal waters and to discern the role of natural vs. human-caused processes. However, natural variability in the acidity of coastal waters—which is significant both within and across different habitat types—has made it difficult to assess the human contribution to long-term changes in coastal acidity.

Through a NOAA Postdocs Applying Climate Expertise (PACE) fellowship, Dr. Andrea Fassbender collaborated with scientists at NOAA/PMEL, the University of Washington, the Washington Ocean Acidification Center, and the Washington State Department of Ecology to generate the first estimates of the long-term average seasonal cycle for a number of critical ocean variables throughout the upper 10 m (~33 ft) of Washington’s marine waters, based on a synthesis of all available ocean data sets that included sufficient carbon observations. Observations were compiled from sea-going research cruises (e.g., https://www.pmel.noaa.gov/co2/story/Large-scale+Coastal+Sections and http://nvs.nanoos.org/CruiseSalish), moored time-series stations (e.g., https://www.pmel.noaa.gov/co2/story/La+Push), and underway ship-of-opportunity measurements from the Surface Ocean CO2 Atlas (https://www.socat.info/). In this study, monthly average conditions for temperature, salinity, and carbon chemistry variables associated with OA were calculated for eight sub-regions and nine mooring locations within Washington marine waters. Results of this study will provide a foundation for comparison with regional model and observational data for future water quality assessments and showed clear differences in seasonal patterns for all carbonate chemistry variables between the Salish Sea and the Washington coast. Marine organisms living in the Salish Sea are exposed to much larger seasonal changes in acidity, carbon dioxide, and carbonate ion availability than those living in nearby coastal and open ocean waters.