Study area and reference zones for freeze onset (a), Sea Surface Temperature (SST) (b), and ALAMO deployment area (c). AXBT and radiometer SST data were collected over the region between Bering Strait and the northern shelf break. Reference area (a) was selected because of the availability of oceanographic moorings and ship-based CTD data along the PMEL Icy Cape and Distributed Biological Observatory lines that will be available for data validation and other future research.

Projection: In 2017 freeze onset on the Chukchi Sea continental shelf northwest of Icy Cape will begin near the end of November to the first week of December. This is ~36 days later than the long-term mean (1981-2016). The metric is defined by sea-ice concentration reaching 30% as determined by passive microwave observation in the reference area shown in Fig. 1 (after Serreze et al. 2016).

Data considered: 2016 and 2017 in-situ observations from air-deployed ALAMO profiling floats 9076, 9085, and 9119; AXBT arrays deployed in the region from the NOAA aircraft along with simultaneous SST radiometry. Persistence is evaluated using historical ice concentration from passive microwave satellites and sea-surface temperature from the NOAA OISST dataset. Figure 1: Study area and reference zones for freeze onset (a), SST (b), and ALAMO deployment area (c). AXBT and radiometer SST data were collected over the region between Bering Strait and the northern shelf break. Reference area (a) was selected because of the availability of oceanographic moorings and ship-based CTD data along the PMEL Icy Cape and DBO lines that will be available for data validation and other future research.

Rationale: Data from ALAMO float 9119 indicate sub-surface temperatures in 2017 are 1.5 to 4 °C warmer than the previous year at the same time and region (Fig. 2). The largest difference is below 30 m depth and represents ~40% of the water column. This reservoir of heat is salinity stratified and will not be much affected by cooling until surface ice formation and brine rejection destabilize the water column. Simultaneous AXBT deployments show float data are broadly representative of sub-surface conditions on the offshore Chukchi shelf between Point Hope and Icy Cape. AXBT and aircraft radiometer data further show this was the warmest water in the offshore region east of the convention line. Float tracking indicates northward advection is much less than 2016, which may mitigate against delayed freeze-up as ocean heat flux toward the advancing ice edge will be reduced. On 3 October 2017, float 9119 was only displaced 30 km northward from the launch position on 13 September, after drifting back and forth and in circles. Review of historical data (Fig. 3) shows that the freeze-up date since 2002 has been uniformly (and unsurprisingly) later than the long-term mean date, year-to-year variability is less, and the relationship between freeze-up data and OISST is considerably weaker than in the past. 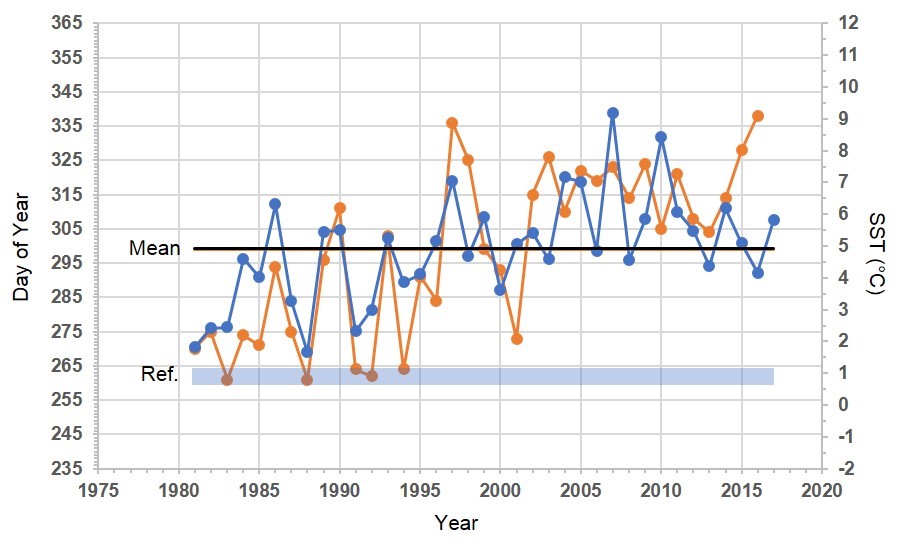 Figure 3: (Blue) Time series of optimally interpolated SST (NOAA-OISST) for days 260-264 in the reference box (69 to 71N – 162 to 169W); (Orange) Observed date that sea-ice concentration in the area NW of Icy Cape first reaches 30% concentration (based on passive microwave data). SST and freeze onset date show expected trends, but the apparent change in variability is notable. The decrease in correlation between OISST and freeze onset from 0.8 in the first 18 years of record to near zero in the second may be due to increased spatial and temporal distance between OISST at day 260-264 and the advancing ice edge.

Remarks: Float data reveal in real time the presence of ocean heat not detectable by satellite, and provide continuous monitoring of transport, water column stability, and cooling rate. This information is not otherwise available from other observing systems. The NOAA aircraft also provides regional-scale observation capacity largely independent of cloud-cover. Float and aircraft data are available via the Arctic Heat website: https://www.pmel.noaa.gov/arctic-heat/.

Contact Kevin Wood for more information or to provide comments or feedback (Kevin.R.Wood@noaa.gov).