Ocean observations in the Papa region, including the NOAA Mooring, and new OOI observing stations.

OCS Papa Mooring...
The ocean is starting to get crowded around Ocean Station Papa, and PMEL's Oc

Difference in sea surface temperature in May 2014 compared to average temperatures during the month of May from 1981-2010. NOAA Station Papa mooring location marked by "P". (Figure from NOAA ESRL)

The NOAA Ocean Station Papa mooring (center) in the Gulf of Alaska is surrounded by other research platforms, including the OOI Profiler and Flanking moorings.

It's Good t...
Two valuable partnerships have allowed successful servicing of the

Ocean Weather Station Papa (OWSP, located at 50°N, 145°W) is an important site for continued monitoring of ocean climate, as it has one of the oldest oceanic time series data records. Weather ship observations at the site exist from December 19, 1949, to June 20, 1981. Originally occupied by a U.S. Weather Ship operated through the Coast Guard by the U.S. Weather Bureau, Canada assumed full responsibility for the site in December 1950. Shortly thereafter, two ships (St. Catharines and the Stonetown) took alternating 6-week shifts on station to ensure an uninterrupted time series. In 1967, larger vessels designed for meteorological and oceanographic observations (the CCGS Vancouver and CCGS Quadra, and later, the Parizeau in 1974) replaced the original vessels.

With the advent of the satellite era, the Weather Ship programs were discontinued, and after August 1981, shipboard measurements along Line P conducted by the Canadian Department of Fisheries and Oceans (DFO) were limited to three to six times per year, and can be found on the Line-P Program website.

In 1997-99 a NOAA PMEL surface mooring was deployed at station Papa as part of the Nation Ocean Partnership Program (NOPP). In October 1999, the NOPP sponsored Oceanographic-Systems for Chemical, Optical, and Physical Experiments (OSCOPE) surface mooring was deployed. Due to a faulty chain, the OSCOPE buoy broke from its line after just one month, and was recovered in early January 2000.

In June 2007, a NOAA surface mooring time series was initiated at Station Papa with funding from an NSF grant to Dr. Steve Emerson (University of Washington) to study the North Pacific Carbon Cycle. At the conclusion of the NSF process study in 2009, NOAA's Office of Climate Observations took over support of the OCS mooring. The Canadian Department of Fisheries and Oceans Line-P program continues to provide ship time for annual mooring maintenance. The OCS mooring is nominally located at 50.1°N, 144.9°W. 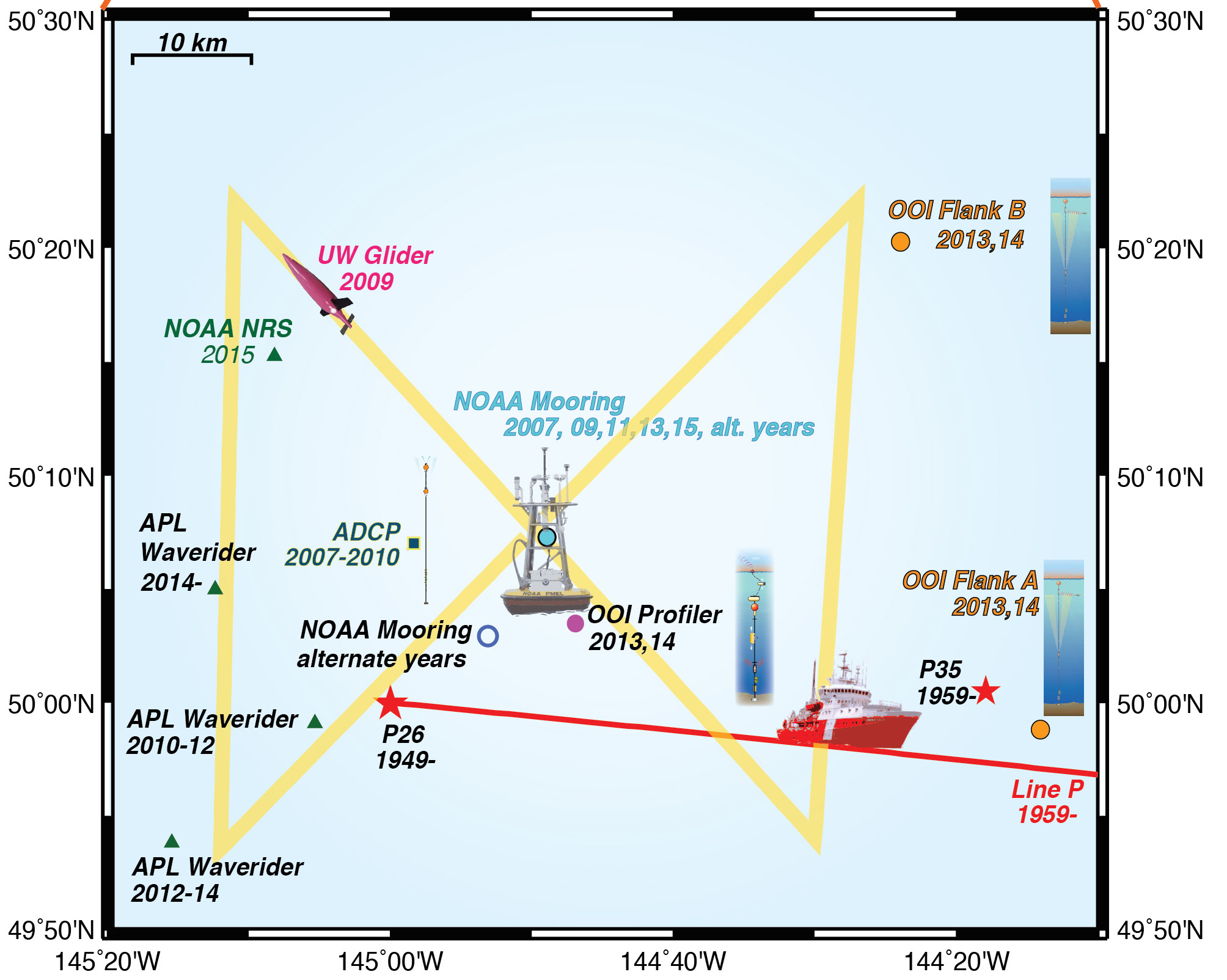 OCS and partner study initiatives near Ocean Station Papa as of 2016.

With the ongoing DFO Line-P cruises and NOAA OCS surface mooring providing the backbone observations at this important historical site, Station Papa continues to be a favorite location for process studies. In recent years the station has been enhanced with a glider, subsurface ADCP moorings, profiling floats, a noise reference station mooring, and a wave measuring buoy. Many of these observations are still underway. Beginning in 2014, the NSF Ocean Observing Initiative (OOI) enhanced Station Papa with an array of subsurface moorings, making it one of four Global Nodes.

See the Other Research at Ocean Station Papa page for more information about these other studies. 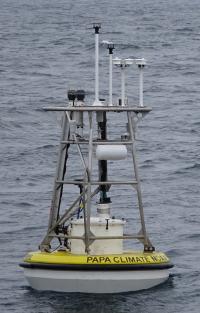