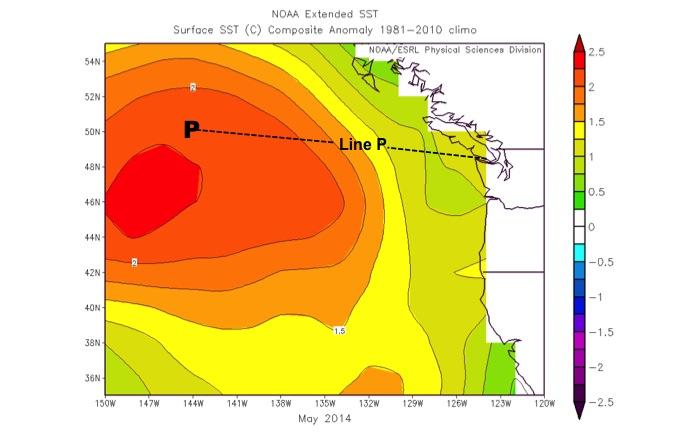 Difference in sea surface temperature in May 2014 compared to average temperatures during the month of May from 1981-2010. NOAA Station Papa mooring location marked by "P". (Figure from NOAA ESRL)

Researchers at NOAA's Pacific Marine Environmental Laboratory (PMEL) and the University of Washington Joint Institute for the Study of Atmosphere and Oceans (JISAO) are watching with great interest as an area of warm surface water persists in the North Pacific.

During the fall and early winter of 2013 – 2014, residents of the Pacific Northwest enjoyed more dry weather than normal, with fewer and weaker storms. The weaker than usual winds resulted in reduced heat transfer between the air and ocean, less mixing of cold water from below, and reduced transport of warm water toward the equator. This left a large mass of warm water in the Northeast Pacific, nicknamed "The Blob." At its core, the water mass was ~3°C above normal temperatures in February 2014, and it is still prominent going into the summer months.

The PMEL Ocean Climate Stations (OCS) project Station Papa buoy ismoored in the heart of the blob, making continuous measurements of the atmosphere and ocean at this site since 2007. The Office of the Washington State Climatologist and other OCS scientists will use data from the mooring to evaluate the ocean processes related to the causes and effects of this warmer than usual water mass. PMEL researchers are also onboard a Canadian research vessel that will be servicing the mooring and taking measurements along "Line P" June 8 – 24, 2014.

According to climate models, the region of warm surface water may continue to be well above normal temperatures through late summer 2014. This could affect regional weather, as well as marine ecosystems. The weather could be warmer and more humid than normal, and more thunderstorms may develop. In the marine ecosystem, the warmer water provides more favorable habitat for tuna near the coast, but may adversely affect juvenile salmon through reduced supply of nourishing food sources.