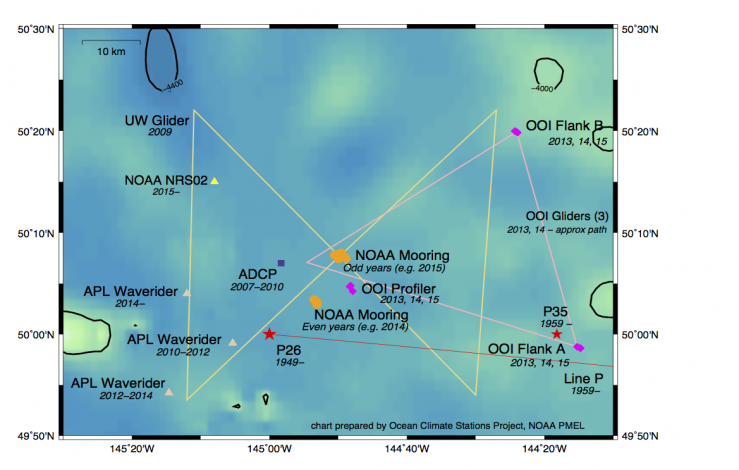 Ocean observations in the Papa region, including the NOAA Mooring, and new OOI observing stations.

The ocean is starting to get crowded around Ocean Station Papa, and PMEL's Ocean Climate Stations (OCS) project gains yet another science partner.

Climate studies have been conducted almost continuously at Ocean Station Papa (50°N, 145°W) since 1949, and OCS has had a surface mooring deployed at this site since June 2007. The OCS mooring is now the primary climate observing platform at the site, and includes a full suite of meteorological sensors, as well as subsurface instruments to 300m. The OCS mooring carries a system to measure CO2 flux, through a partnership with PMEL's Carbon Program. Additional instruments on the bridle used for oxygen measurements are supplied by partners at the University of Washington. A deep temperature/conductivity/pressure sensor has been deployed just above the anchor in recent years, through a partnership with the OceanSITES project. Water sampling and CTD casts at the mooring site and enroute from the Canadian coast, plus ship time for servicing the moorings, are provided through a partnership with Canada's Department of Fisheries and Oceans Line P program. Since 2010, wave height, periodicity, and direction have been measured by a nearby WaveRider mooring maintained by partners at the UW Applied Physics Laboratory.

The newest partner to join the outstanding research being done at Ocean Station Papa is the Ocean Observatories Initiative (OOI). In July 2013, OOI deployed two additional flanking moorings, a nearby profiling mooring, and three gliders at the site. The deployment at Station Papa is the first of several planned global nodes for the OOI project. Uniquely at this site, the OCS mooring will serve as the central mooring of the OOI array, providing all meteorological data and additional subsurface measurements.