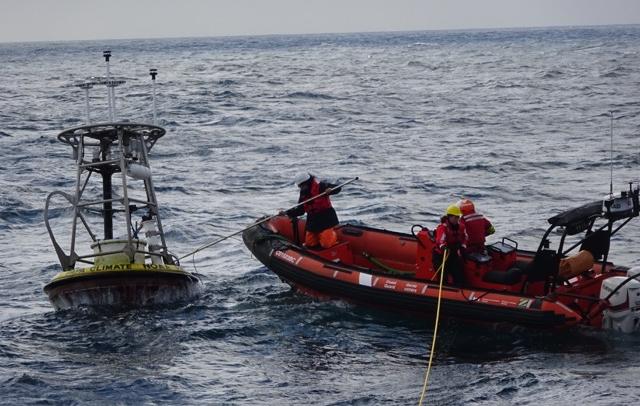 Personnel from NOAA's Pacific Marine Environmental Lab participated in a research cruise aboard the Canadian Coast Guard Ship JOHN P. TULLY, and recorded some great videos of mooring operations. Watch the two short videos at the end of this article, to see the deployment of one climate mooring, and the recovery of the buoy that had been in the water for a year. Get a first hand look at a day in the life of a NOAA buoy technician!

On this trip, the ship sailed out of Sidney, B.C. on June 7, 2015, and returned to port on June 22nd. As part of the science mission, the crew performed water sampling and net tows to study ocean physics, chemistry, and zooplankton. Ten NOAA drifter floats, used to study ocean currents, were also deployed. While the ship was still offshore, an important algal bloom was detected along the coast of North America. Ship's personnel were able to collect additional water samples in coastal waters, to verify the extent of the bloom in Canadian waters.

The ship spent several days at a site in the Gulf of Alaska, called Ocean Station Papa. Beginning in December 1949, Ocean Station Papa (50°N, 145°W) was occupied by a Weather Ship operated through the U.S. Coast Guard by the U.S. Weather Bureau. The site was taken over by a Canadian Weather Ship in December 1950, and several years later oceanographic measurements began to be routinely made.  Though no longer under continuous observations by Weather Ships, the Canadian Institute of Ocean Sciences has been making trips to the site three to six times per year since 1981.

In 2007, the OCS program deployed their first surface mooring at Ocean Station Papa, which now uses satellite technologies to transmit weather and climate data to shore.  This mooring took on the role of those old Weather Ships, and the climate record from Ocean Station Papa is one of the oldest on record.  Watch videos showing how these moorings are deployed and recovered.