It's Good to Have Friends: Partners Service the OCS Papa Mooring 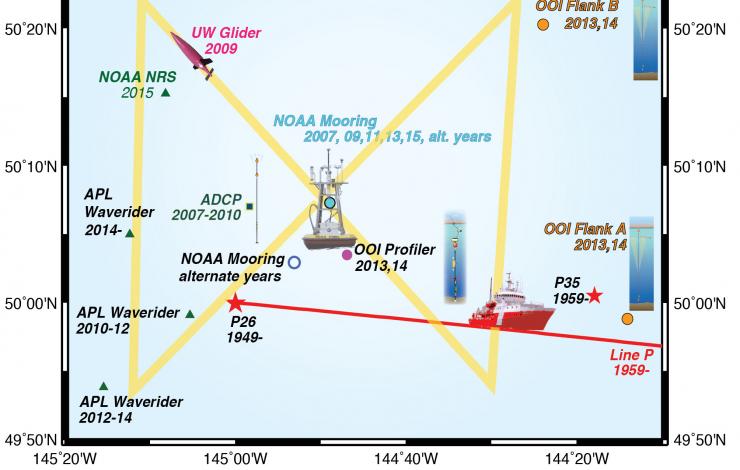 The NOAA Ocean Station Papa mooring (center) in the Gulf of Alaska is surrounded by other research platforms, including the OOI Profiler and Flanking moorings.

The June 2016 deployment of the NOAA Papa mooring in the Gulf of Alaska was accomplished aboard the CCGS John P. Tully, in partnership with Canada’s Institute of Ocean Sciences, Department of Fisheries and Oceans Line P Program.  These long time project partners have been providing ship time and assistance servicing the NOAA Papa mooring since it was first deployed in 2007.  This year, for the first time in nine years, conditions prevented the recovery of the NOAA mooring that had been deployed in 2015.

That mooring was instead recovered aboard the NOAA Ship Ronald H. Brown, which was working in the same area for Ocean Observing Initiative (OOI) operations, just weeks after the Tully cruise.  Though the work schedule was shortened due to unforeseen issues, the ship was still able to accomplish all of their planned work, as well as the recovery of the NOAA Papa mooring.

Thanks to the captain and crew of the NOAA Ship Ronald H. Brown, members of the WHOI mooring group, and Oregon State University OOI technicians, who made the recovery operations a success.  Grateful thanks also go to the chief scientist of the cruise, Dr. Ed Dever, who coordinated with NOAA and the NSF cruise sponsor to make this recovery possible.  Continued thanks to the Line P Program for their ongoing support of NOAA mooring operations.