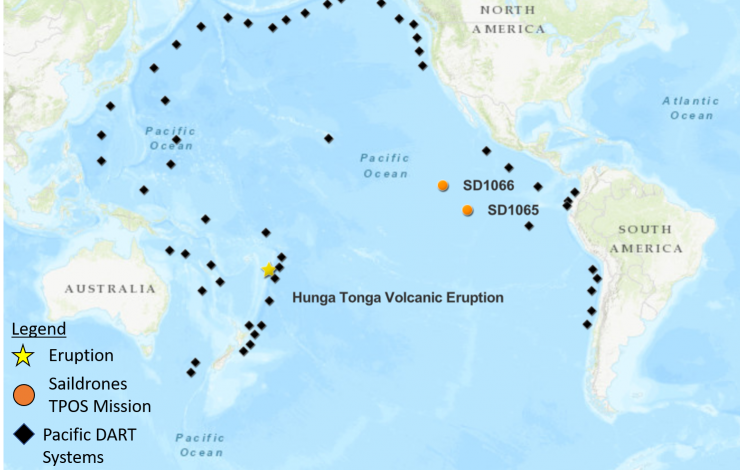 Map of the tropical Pacific showing the positions of DART buoys operated by NOAA and international partners as well as saildrone 1065 and 1066 relative to the Hunga Ha’apai Volcano located in the Pacific island nation of Tonga, which is an archipelago consisting of more than 170 islands.

On January 15, 2022, the Hunga Tonga-Hunga Ha’apai volcano erupted off the coast of Tonga in the South Pacific Ocean, generating a tsunami and triggering tsunami alerts around the world. Most tsunamis are commonly caused by earthquakes and only about 5% of tsunamis are generated from volcanic activity (ITIC), making this a rare event captured by NOAA’s observing instruments.

Buoys and Saildrone uncrewed surface vehicles additionally recorded an air pressure wave associated from the eruption. The pressure wave from the volcano explosion was detected as far as the Mediterranean Sea and traveled about 312 meters/second (697 miles per hour) and circled the Earth three times before dissipating. The Krakatau eruption in 1883 was the last event of such scale. Krakatau produced similar air pressure waves and a devastating tsunami that claimed the lives of ~36,000 people and the destruction of hundreds of coastal towns and villages.

Deep-ocean Assessment and Reporting of Tsunamis (DART) systems are strategically deployed by NOAA and international partners around the Pacific Ocean to detect tsunami waves and send data in realtime to tsunami warning centers. These systems recorded the propagating tsunami across the Pacific and prompted expansion of the tsunami alerts for many coastlines in the Pacific. Those warnings may have saved lives at many coastlines that were later flooded by the waves, some as far as the Pacific coast of Peru.

Along with the tsunami wave amplitudes measured by the DART system, the atmospheric pressure wave associated with a shock-wave emanating from the volcano explosion was measured. The air pressure signal detected by weather station buoys is the leading signature before the tsunami wave train and may provide clues for the mechanism of this unusual tsunami generation. However, given that the pressure signal mixed with the tsunami amplitudes in the data, high-resolution air pressure measurements are needed to decipher the DART tsunami records.

Coincidentally, two NOAA-Saildrone drones were approximately 3500 nautical miles (~4028 miles) away from the eruption, the distance to drive between Anchorage, Alaska and Miami, Florida, in the eastern tropical Pacific Ocean. The two drones are part of a 6-month, ongoing Tropical Pacific Observing System (TPOS) mission targeting the eastern tropical Pacific hurricane genesis region and El Niño Southern Oscillation (ENSO) development. The two drones were able to detect an atmospheric pressure jump in high-resolution measurements, capturing crucial information associated with the remote volcanic activity in an observationally-sparse region of the ocean for post-analysis with the DART tsunami records.

The phenomena recorded in the data is unique and additional research and development is needed to accommodate these types of tsunami events in the model used to forecast tsunami events. PMEL tsunami researchers are analyzing the data from the various platforms to get a better understanding of this rare event.

PMEL has also previously studied the dynamics of a smaller scale eruptive activity of this volcano using acoustic data and will uncover and analyze additional acoustic data from hydrophones deployed across the Pacific when they are recovered later this year.

Read more on the TPOS 2021 Saildrone Mission on the blog page.

More about the event can be found on the PMEL Tsunami Research group events page.