Saildrone is first to circumnavigate Antarctica, in search for carbon dioxide 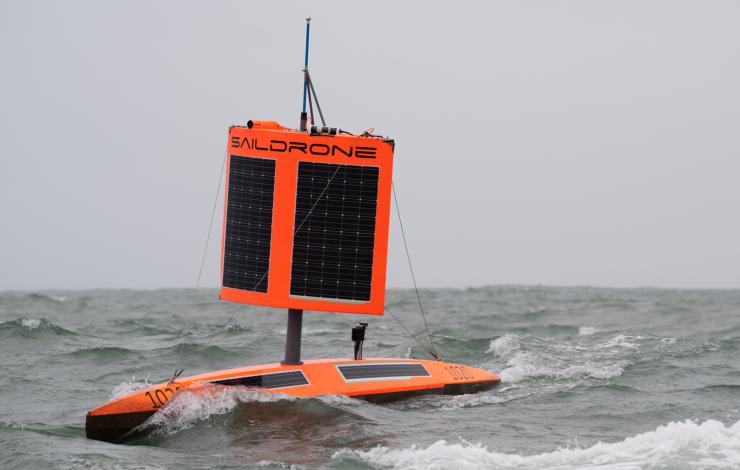 Click on image to see animation of the sea-air CO2 from the 2019 Antarctica circumnavigation.

It was an audacious idea: To send an unmanned saildrone on a 13,670-mile journey around Antarctica alone, at the mercy of the most hostile seas on the planet. In winter.

“The assumption was the Southern Ocean would eat the saildrone … and that would be that,” said NOAA oceanographer Adrienne Sutton. “But we were willing to try, given the large role the ocean plays in the trajectory of climate change. Getting the Southern Ocean's carbon balance right is urgently important."

Despite a run-in with an iceberg that wrecked some of its sensors, Saildrone 1020 completed its mission on August 3 having successfully collected oceanic and atmospheric carbon dioxide measurements with an instrument developed by NOAA’s Pacific Marine Environmental Laboratory.

The 196-day voyage was the world’s first autonomous circumnavigation of Antarctica — a technological feat that was unfathomable just a decade ago.

An arduous journey around the end of the world

Saildrone 1020 and two counterparts launched from Point Bluff, New Zealand on January 19, 2019, on a mission funded by the Li Ka Shing Foundation. The three saildrones collect and transmit a range of data on weather, seal and krill populations, and levels of carbon dioxide, CO2, in the air and water.

Until recently, scientists assumed that the Southern Ocean steadily absorbed large volumes of CO2 from the atmosphere — a big contributor to the entire ocean’s uptake of up to 40 percent of the greenhouse gases driving global warming.

However, scientists also knew shifts in winds and circulation around Antarctica could alter CO2 uptake from the atmosphere, and recent measurements from instrumented Argo floats showed that under certain conditions the Southern Ocean could emit CO2 instead of absorbing it. But researchers had yet to sample vast areas, especially during stormy autumn and winter seasons.

The severe weather survived by the saildrone demonstrated why.

Pounded by storms right after leaving New Zealand, Saildrone 1020’s partners, Saildrones 1022 and 1023, were soon forced to return to port for repairs, while Saildrone 1020 pushed on through roaring winds and giant waves.

Navigating east of the Drake Passage on April 5, a collision with an iceberg damaged its atmospheric sensors and onboard camera, but left the carbon dioxide sensor intact.

“On four previous voyages in the Southern Ocean, the wings on our saildrones broke after just a few days, so we went back and built something we thought was indestructible,” said Saildrone founder and CEO Richard Jenkins. “It was a long shot, but it worked out exactly as we hoped."

Preliminary results suggest that parts of the ocean identified by the floats as potential CO2 sources were indeed emitting the greenhouse gas during winter months. Saildrone 1020 also got close enough to one of the floats to allow scientists to compare their CO2 measurements, a valuable cross-check of different robots and observing techniques.

“It was a high-risk, high reward kind of deployment,” Sutton said. “We weren’t sure it was going to make it.

Meanwhile, after being repaired and relaunched, Saildrones 1022 and 1023 are finding their own their way around Antarctica now.