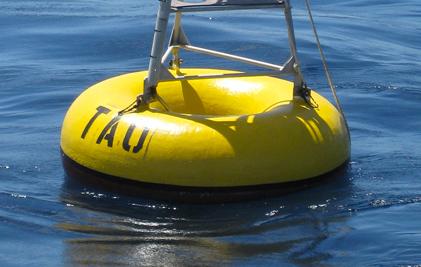 In a new study published in Science, NOAA and NASA scientists used space-borne observations of carbon dioxide (CO2) from NASA’s Orbiting Carbon Observatory-2 satellite, or OCO-2, to characterize the tropical atmospheric CO2 response to the strong El Niño event of 2015-2016.  The El Niño provided NASA and NOAA an unprecedented opportunity to test the effectiveness of this new observation tool. OCO-2 is NASA’s first satellite designed to measure atmospheric carbon dioxide with the precision, resolution, and coverage necessary to quantify regional carbon sources and sinks.

Observations of carbon dioxide concentrations over the tropical Pacific from the satellite were validated by data from NOAA’s Tropical Pacific Observing System of buoys, which directly measure carbon dioxide concentrations at the surface of the ocean. Both observing systems showed that in the early months of the El Niño, during the spring of 2015, outgassing of carbon dioxide over the tropical Pacific Ocean significantly declined by 26 to 54 percent.“This response is consistent with what we expect from a theoretical understanding, and comparable to what the NOAA data suggests,” said Richard Feely, senior scientist at NOAA’s Pacific Marine Environmental Laboratory, who is a co-author on the paper.

This research is part of a series of studies to better understand the growth of carbon dioxide concentrations in the global atmosphere using the new NASA satellite.  The studies show how various regions contribute to those emissions or serve as sinks, absorbing carbon dioxide emissions at different times.