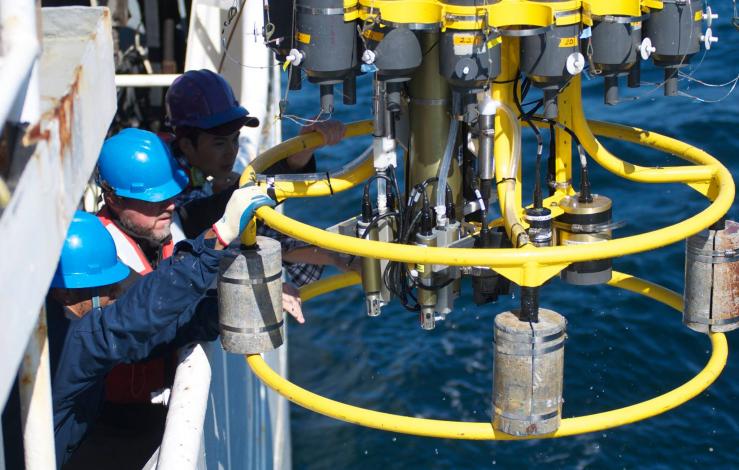 A Conductivity, Temperature and Depth (CTD) sampler is retrieved during the East Coast Ocean Acidification cruise that characterized marine carbonate parameters in the waters along the U.S. and Canadian coasts. Credit: NOAA 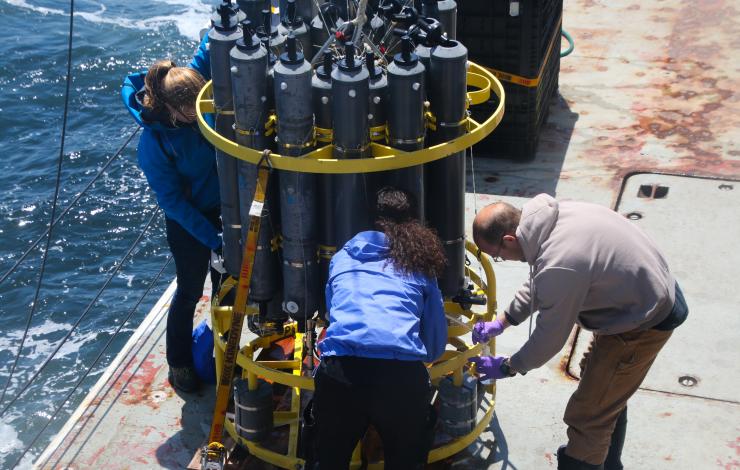 New NOAA and partner research comparing ocean acidification around North America shows that the most vulnerable coastal waters are along the northern part of the east and west coasts. While previous research has looked at specific regions, the new study appearing in Nature Communications, is the first in-depth comparison of ocean acidification in all North American coastal ocean waters.

“Ocean acidification is everywhere, but this synthesis basically shows that, depending on the location, it can manifest very differently,” said Wei-Jun Cai, lead author and a professor at the University of Delaware School of Marine Science and Policy.

Ocean acidification, a global process in which the ocean absorbs carbon dioxide from the atmosphere, is occurring faster than at any time in the past 50 million years. The global rise in ocean acidity is fueled by human-created greenhouse gases. An estimated 25 percent of those emissions are absorbed by the ocean.

In the ocean waters off the United States east coast, the northbound Gulf Stream current brings warm waters from the tropics while the southbound Labrador Current brings cold waters from the Arctic and subarctic regions. The colder ocean temperatures along the northern part of the east coast take up more carbon dioxide from the atmosphere than do warmer waters along the southern east coast and Gulf of Mexico. This uptake of carbon dioxide accelerates ocean acidification, which can hamper the ability of shellfish, corals and other valuable marine species to build their shells and thrive.

On the west coast, ocean acidification is affecting the waters of the California Current, which extends from the United States - Canadian border to Baja California. The California Current is characterized by strong, cold currents, and wind-driven upwelling events. Upwelling brings colder, carbon-dioxide-rich subsurface waters to the ocean’s surface to replace surface water that has been pushed away by winds.

“The water from the subsurface has low pH and high carbon dioxide, which causes stress to the biological system,” said co-author Richard Feely of NOAA’s Pacific Marine Environmental Laboratory (PMEL). “So the combination of the uptake of anthropogenic carbon dioxide from the atmosphere and the upwelling of CO2-rich low-pH water from below leads to enhanced acidification in this region.”

The research team from NOAA, the University of Delaware, and scientists from Canada, Mexico, the United Kingdom, China and Taiwan based the new findings on data gathered during several research cruises between 2007 and 2018. A number of those cruises were led or supported by NOAA’s Pacific Marine Environmental Lab, Atlantic Oceanographic and Meteorological Lab and the Ocean Acidification Program. Other PMEL authors include Simone Alin, Jessica Cross, Brendan Carter (UW/JISAO) and Adrienne Sutton.

Read the full news release from the University of Delaware.