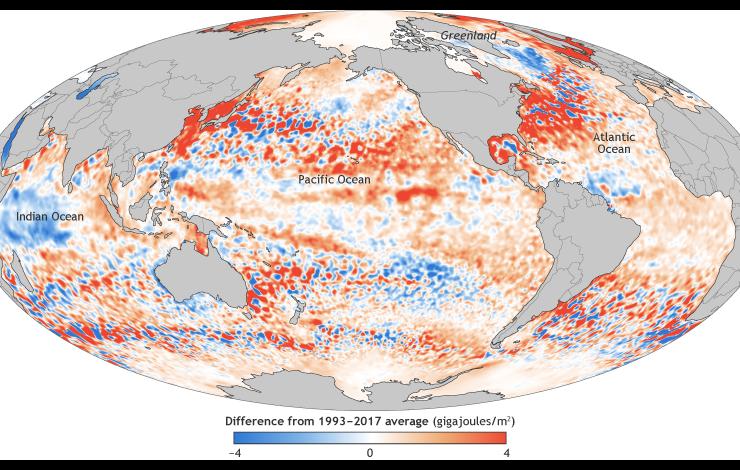 This map shows the ocean heat content in the upper ocean (from the sea surface to a depth of 700 meters, or 2,300 feet) for 2017 relative to the 1993–2017 baseline. It's based on a combination of Argo float observations and satellite data. Places with higher-than-average heat storage are orange, while places with lower-than-average heat storage are blue

The 28th annual State of the Climate report was recently released highlighting that 2017 was the third-warmest year on record for the globe, behind 2016 and 2015. The new report confirmed that 2016 surpassed 2015 as the warmest year in 137 years of recordkeeping. Several climate indicators also set new records, including greenhouse gas concentrations, sea level rise, heat in the upper ocean, and Arctic sea ice extent.

The 2017 average global CO2 concentration was the highest measured in the modern 38-year global climate record and records created from ice-core samples dating back as far as 800,000 years. Sea level rise also hit a new high, about 3.0 inches higher than the 1993 average and rising globally, at an average rate of 1.2 inches per decade. Heat in the upper ocean hit a record high, reflecting the continued accumulation of thermal energy in the uppermost 2,300 feet of the global oceans. Arctic sea ice maximum extent (coverage) was the lowest in the 38-year record. Extreme precipitation was also recurring theme this past year.

The State of the Climate in 2017 was recently published in a special edition of the Bulletin of the American Meteorological Society. This report is led by NOAA's National Centers for Environmental Information and is based on contributions from more than 500 scientists representing over 65 countries around the world. It is the most comprehensive annual summary of Earth’s climate and provides a detailed update on global climate indicators, notable extreme weather events and other environmental data collected from locations on land, water, ice, and in space.

Access the full BAMS State of the Climate in 2017 report here.