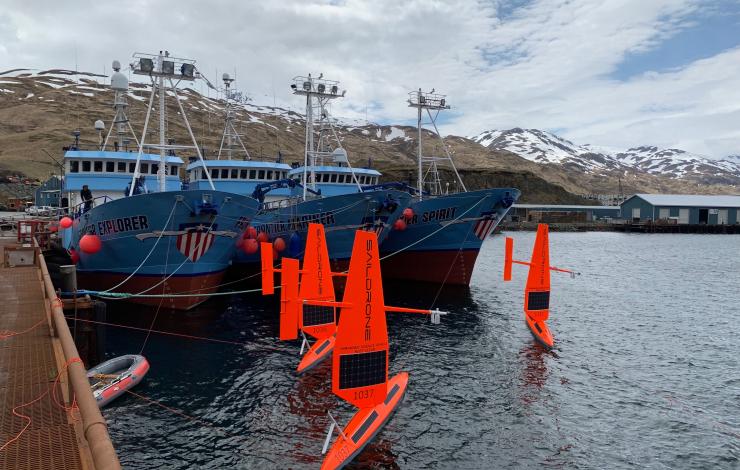 Three of six saildrones getting ready for deployment from Dutch Harbor, AK, on the 2019 Arctic mission. Photo Credit: Saildrone, Inc.

On May 16, six saildrones loaded with scientific instruments and cameras launched from a dock in Alaska's Dutch Harbor to monitor ongoing changes to the U.S. Arctic ecosystem food-chain, ice movement, and large-scale climate and weather systems.

This is the first year NOAA and NASA scientists will be working together to use the drones to survey as close to the Arctic ice edge as possible. Measurements collected this summer in the Arctic will not only be used to improve NOAA and NASA satellite ocean temperature measurements, they will also be available to global weather agencies for operational use.

While most of the saildrones will be pursuing the ice edge for the duration of the three-month mission, two other simultaneous projects will also tackle some big questions on how this cutting-edge technology can be used to collect critical observations. NOAA PMEL scientists will continue to study how the Chukchi Sea is absorbing carbon dioxide to help improve weather and climate forecasting as well as our understanding of ongoing changes in the Pacific-Arctic ecosystem.  The Bering Sea is home to the largest walleye pollock fishery and the declining population of northern fur seal which primarily feed on pollock. During the summer, NOAA Fisheries scientists will use the saildrone combined with traditional at-sea tracking techniques and video cameras to get a seals-eye view during fur seal feeding trips and measure walleye pollock abundance and distribution. Read more about the work done by NOAA's Alaska Fisheries Science Center.

This is a joint NOAA mission along with the Earth & Space Research, the University of Washington's Joint Institute for the Study of Ocean and Atmosphere and the Applied Physics Lab, and Saildrone, Inc.

Saildrones have traveled about 45,000 nautical miles on Arctic missions since 2015. Follow along with drones as they collect data on fish, fur seals, changes in the Arctic ecosystem and more on the mission blog.