How “The Blob” affected groundfish distributions in the Gulf of Alaska 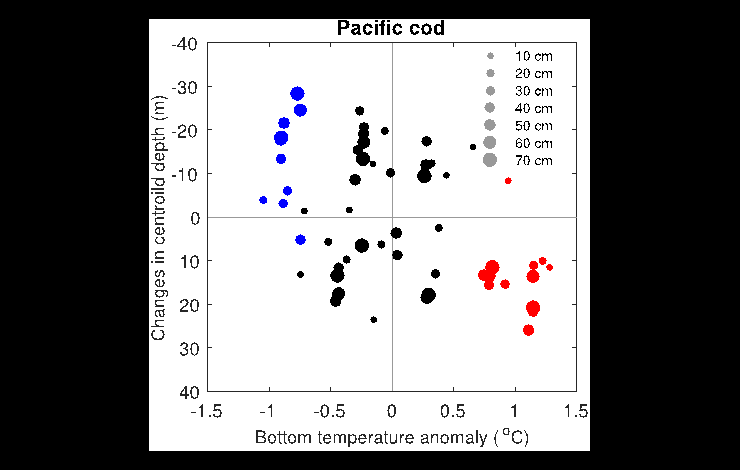 In 2014-2016, a marine heat wave, also known as the Blob, produced abnormally warm waters off the US West Coast and in the Gulf of Alaska. Temperatures in the upper 100 meters of the ocean were more than 2.5° C higher than the long term (1981–2010) average from satellite, buoy and ship observations. Many important commercial fish species are groundfish that may not be affected by warm water near the surface. Oceanographers and fisheries scientists from the University of Washington’s Joint Institute for the Study of the Atmosphere and Ocean and NOAA’s Pacific Marine Environmental Laboratory and Alaska Fisheries Science Center therefore wondered "were bottom temperatures warmer during the Blob and how did groundfish respond?

As the nation’s fisheries stewards, NOAA has been studying groundfish and measuring the water temperature consistently in the Gulf of Alaska using trawl net surveys in the spring and summer since 1996. Measurements between 1996 to 2015 showed that 2015 had the warmest bottom temperature, at 0.88° C warmer than average, to a depth of 500 meters in the central Gulf of Alaska while 1999 was the coldest at 0.61° C below average.

The researchers determined for six commercial groundfish species what bottom temperature habitat was potentially available to them and where they were actually found. A comparison showed how they responded to warm and cold conditions. One might expect that fish are adapted to living in a certain temperature range and during warm years fish would shift to available cooler, deeper water, and conversely, in cold years move to warmer, shallower water. This was indeed observed for Pacific cod; however, most species and sizes showed more complex responses. Arrowtooth flounder responded like cod, except in cold years smaller arrowtooth shifted deeper. Pacific ocean perch responded oppositely to expectations: in warm years most sizes moved shallower, and in cold years all sizes moved deeper. Rock sole depths did not change much in warmer or colder conditions. Previous studies show that they live in shallower water; thus they may be adapted to temperature extremes and do not respond to them.

This study demonstrates how the distributions of commercial groundfish species are affected by temperature changes and may indicate varying effects of ocean warming.