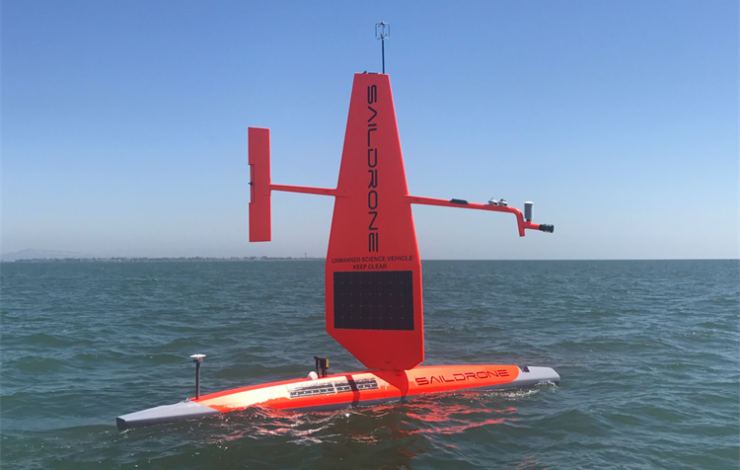 Saildrone SD1006 starting its journey from San Francisco, California, to the SPURS-2 region in the eastern tropical Pacific.

With the ability to transit thousands of kilometers while making surface observations similar to a moored buoy, the unmanned surface vehicle (USV) Saildrone, manufactured and piloted by Saildrone, Inc., could contribute in important ways to the Global Ocean Observing System (GOOS). Saildrones are powered by renewable energy, using wind for propulsion and solar energy for vehicle control, sensor operation, on-board data processing, and real-time data telemetry. Through a Cooperative Research and Development Agreement (CRADA) between PMEL and Saildrone, sensors for measuring 22 Essential Ocean and Climate Variables (EOVs and ECVs) and high-frequency platform motion have been integrated into the Saildrone system. In a paper by Zhang and colleagues published by Oceanography, Saildrone data were compared against state-of-the-art mooring measurements being collected for the NASA-funded Salinity Processes in the Upper Ocean Regional Study 2 (SPURS-2).

The Saildrone mission was part of a Tropical Pacific Observing System (TPOS)-2020 pilot study, funded by NOAA’s Ocean Observations and Monitoring Division and NOAA’s Office of Marine and Aviation Operations, with a main goal to test the ability of Saildrone to make climate-quality measurements of air-sea interaction. During the mission, two Saildrones were launched from San Francisco on September 1, 2017. The vehicles transited to the equator at ~125°W via the SPURS-2 site at 10°N, 125°W, returning to California by May 2018. The heavily instrumented SPURS-2 central buoy at 10°N, 125°W, deployed by Woods Hole Oceanographic Institution (WHOI), provided known standards of measuring air-sea interaction processes for comparison with the Saildrone. There was also a 6-7 hour time period when R/V Revelle was in close proximity of both the Saildrones and the WHOI buoy, so that measurements from all platforms can be compared. This paper presents: 1) Saildrone measurements for air-sea heat fluxes critical for SPURS-2 to better understand the upper ocean stratification under the Inter-Tropical Convergence Zone (ITCZ) in the eastern Pacific Warm Pool; and 2) comparisons of this new USV technology against traditional measurement methods. The Zhang et al. (2019) validation of the Saildrone air-sea interaction measurements demonstrates that Saildrone is an effective platform for observing a wide range of oceanographic variables important to air-sea interaction studies. The high-quality measurements by Saildrone qualifies it as a potential ocean observing platform of GOOS for sustained ocean observation critical for weather and climate forecasts, and for intensified observation of process studies to better understand governing mechanisms of multiscale oceanic and atmospheric variability.

For more information, view the full article at Oceanography here.