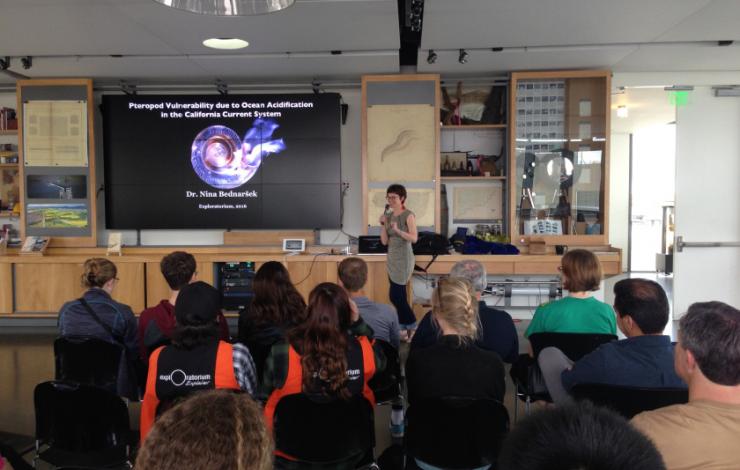 Nina Bednarsek captivates the audience at the Exploratorium during the West Coast Ocean Acidification Cruise in 2016. She is sharing her recent findings about the plight of pteropods. Photo: Meg Chadsey, Sea Grant

Dr. Nina Bednarsek has been awarded the biennial SeaDoc Society's’ Salish Sea Science Prize for her groundbreaking work on the impacts of ocean acidification on pteropods, planktonic marine snails, as well as enhancing policy and regulatory processes along the US West Coast.  Her novel research is filling gaps needed to catalyze management actions that will mitigate the harmful effects of ocean acidification on marine ecosystems. Dr. Bednarsek was an NRC postdoctoral research fellow with PMEL from 2012 - 2015 where she worked with Carbon Program. She has authored or co-authored 12 papers and contributed to major state and national reports on ocean acidification.

Dr. Bednarsek’s research with PMEL has found that the highest impacts on pteropods from ocean acidification is observed in the Salish Sea. Her results show that live pteropod shells undergo dissolution at aragonite saturation state values <1, which is commonly found in subsurface Salish Sea waters and along the Washington coast during the upwelling season. With collaborators, she developed a new set of ocean acidification indices that could be used by coastal States and the US Environmental Protection Agency to address water quality issues related to ocean acidification.

After her postdoc, she continued her research and policy work at the University of Washington before joining the Southern California Coastal Water Research Project where she collaborates with scientists from PMEL, University of Washington Ocean Acidification Center, and other local and state institutions, including the Washington State Marine Resources Council, on her research on ocean acidification in the Salish Sea and California Current System.

The SeaDoc Society is a science-based marine conservation program that is focused on people and science healing the sea. It funds and conducts marine science and uses science to improve management and conservation in the Salish Sea. It is a program of the Karen C. Drayer Wildlife Health Center, a center of excellence at the UC Davis School of Veterinary Medicine. Read the full announcement on the SeaDoc Society website here: http://www.seadocsociety.org/salish-sea-science-prize/.