The Future of Ocean Acidification 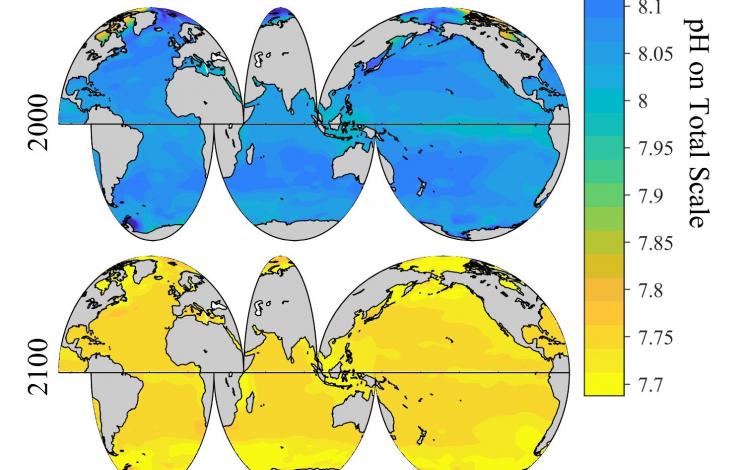 The climatology developed in this study shows pH trajectories from the past and into the future.

New research by NOAA, the University of Maryland, and international partners published in Nature Scientific Reports shows that the changing chemistry of seawater has implications for continued greenhouse gas absorption.

The ocean has been playing an important role in helping slow down global climate change by removing the greenhouse gas carbon dioxide (CO2) from the atmosphere. However, decades of ocean observations show that the CO2 absorbed by the ocean is changing the chemistry of seawater, a process known as ocean acidification. The study discusses the reduced buffering capacity of the ocean as pH levels drop and its implications for reducing the ocean’s role as a CO2 sink in the future.

The researchers from NOAA's PMEL and NCEI and research institutions in Norway stress the importance of leveraging in situ observation-based global pH data products to help improve model projections. A climatology developed from this research may lead to more preventive and adaptive solutions to reduce carbon dioxide emissions and, at the same time, allow for ocean acidification adaptation strategies in regional areas.

The ocean has taken up about 25 percent of the excess gas, the equivalent of over 600 billion tons of carbon dioxide, from 1750 to 2015. As atmospheric CO2 levels increase, so do the levels in the ocean.

When seawater absorbs carbon dioxide its acidity is increased, which decreases the building blocks used by shellfish to grow their shells. Some studies have shown that ocean acidification has negative implications for marine life, particularly clams, mussels, coral reefs, and small sea snails, which could have difficulty building or maintaining their shells in increasingly acidic waters.

The capacity of ocean waters to take up surplus anthropogenic CO2 has been decreasing rapidly. This study suggests that the ocean’s “buffer capacity” could decrease by as much as 34 percent from 2000 to 2100 under the Intergovernmental Panel on Climate Change (IPCC) RCP8.5 scenario, which is the highest “Representative Concentration Pathway” of potential greenhouse gas emissions and atmospheric concentration levels through 2100. The rapid decrease in this "buffer capacity" suggests that while the ocean will likely continue to take up more CO2 in the future due to the increasing atmospheric CO2 concentrations, the proportion of anthropogenic carbon dioxide entering the ocean will decrease. The ocean’s role in buffering global climate change will gradually diminish, and ocean acidification could accelerate.

The study is the first of its kind to link modern observed pH data with modeled carbon dioxide projections to provide a high-resolution regional view of the pH trajectory in all locations of the global surface ocean.

The work will provide improved regional ocean acidification trajectories, above what the model output could produce alone. Comparison with the model outputs show that this climatology could improve pH projection by up to ~0.06 pH units at certain locations of the global ocean, equivalent to a 15 percent acidity difference, or ~3 decades of pH change.

Funding for this study was provided by NOAA's Ocean Acidification Program and Ocean Observing and Monitoring Division. Along with NOAA, researchers were affiliated with the Earth System Science Interdisciplinary Center (ESSIC) at the University of Maryland and the Joint Institute for the Study of the Atmosphere and Ocean at the University of Washington, both NOAA cooperative institutes, as well as, NORCE Norwegian Research Centre, Bjerknes Centre for Climate Research, Bergen, Norway, and Geophysical Institute, University of Bergen.