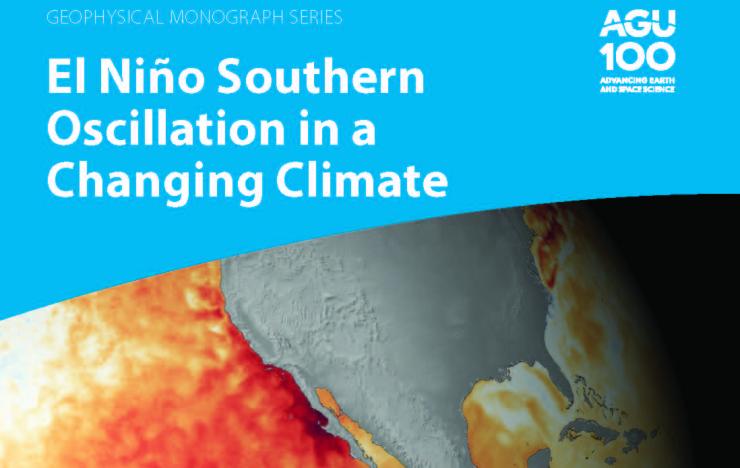 The El Niño Southern Oscillation (ENSO) in the Pacific Ocean has major worldwide social and economic consequences through its global scale effects on atmospheric and oceanic circulation, marine and terrestrial ecosystems, and other natural systems. It is the most dramatic year-to-year variation of the Earth’s climate system, affecting agriculture, public health, freshwater availability, power generation, and economic activity in the United States and around the globe. Ongoing climate change is projected to significantly alter ENSO’s dynamics and impacts.

The future of ENSO is the subject of a new book published by the American Geophysical Union. With 21 chapters written by 98 authors from 58 research institutions in 16 countries, the volume covers the latest theories, models, and observations, and explores the challenges of forecasting El Niño and La Niña. The book, “El Niño Southern Oscillation in a Changing Climate” was published online on November 2.

“This is the first comprehensive examination of how ENSO, its dynamics and its impacts may change under the influence of rising greenhouse gas concentrations in the atmosphere,” said Michael McPhaden, senior scientist with PMEL's Global Tropical Moored Buoy Array, and co-editor of the new volume.  Two other co-editors are from Australia: Agus Santoso, a scientist with the University of New South Wales,  and Wenju Cai, a researcher with the Commonwealth Scientific and Industrial Research Organisation, also known as CSIRO.

The new book, three years in the making, tracks the historical development of ideas about ENSO, explores underlying physical processes and reveals the latest science on how ENSO responds to external factors such as climate phenomena outside the tropical Pacific, volcanic eruptions, and anthropogenic greenhouse gas forcing.

How are ENSO impacts likely to evolve in the coming decades?

“Extreme El Niño and La Niña events may increase in frequency from about one every 20 years to one every 10 years by the end of the 21st century under aggressive greenhouse gas emission scenarios,” McPhaden said. “The strongest events may also become even stronger than they are today.”

In a warming climate, rainfall extremes are projected to shift eastward along the equator in the Pacific Ocean during El Niño events and westward during extreme La Niña events. Less clear is the potential evolution of rainfall patterns in the mid-latitudes, but extremes may be more pronounced if strong El Niños and La Niñas increase in frequency and amplitude, he said.

Some ENSO impacts are already being amplified, such as the extensive coral bleaching and increases in tropical Pacific storm activity observed during the 2015-16 El Niño. ENSO is expected to impact tropical cyclone genesis in the future as it does today in the Atlantic, Pacific and Indian Oceans, but precisely how is still an open question.

Read more on the NOAA Research feature and AGU highlight.

To learn more about El Nino and La Nina and the research PMEL does, visit https://www.pmel.noaa.gov/elnino/pmel-research-activities