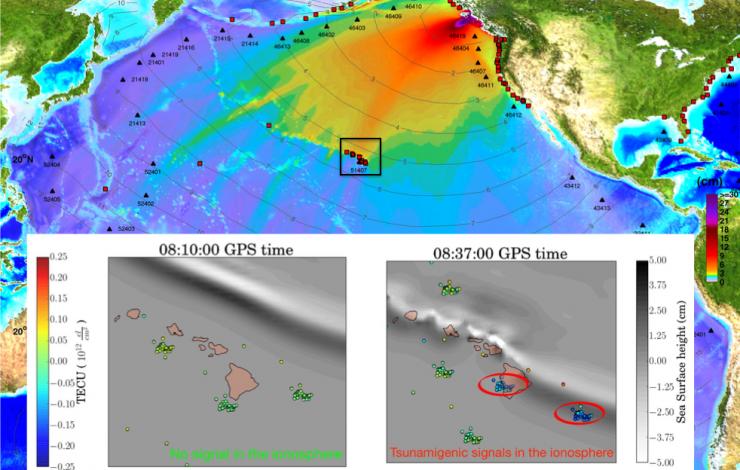 Maximum wave amplitude for the October 28, 2012 Haida Gwaii Tsunami computed with the MOST forecast model. The insets show the space-time TEC variations at 2 epochs within 27 mins interval (08:10 to 08:37 UT - October 28, 2012) at the sub-ionospheric points for 5 satellites showing TIDs, overplotted the tsunami MOST model. The TIDs are consistent in time and space with the tsunami waves.

Tsunamis can produce gravity waves that propagate up to the ionosphere, is a region of the Earth’s atmosphere where there is a high concentration of ions and electrons that can affect the spread of radio waves. These ionospheric disturbances can be studied in detail using ionospheric total electron content (TEC) measurements collected by continuously operating ground-based receivers, for example GPS, from the Global Navigation Satellite Systems (GNSS).

The existing tsunami warning system developed by the NOAA Center for Tsunami Research (NCTR) at PMEL currently relies on numerical modeling MOST (Method of Splitting Tsunami model) and buoy observations to produce timely and accurate tsunami forecast for potentially vulnerable U.S. coastal communities. Ground GNSS observations processed in real-time may have the potential to enhance the current system by independently providing the tsunami speed and amplitude.

This study was a collaboration among the University of Rome, NASA JPL, NCTR and the University of Washington. Dr. Yong Wei from NCTR and UW’s Joint Institute for the Study of the Atmosphere and Ocean provided MOST modeling of tsunami waves near Hawaiian Islands, more than 4,000-km away from the tsunami source, generated by the October 28, 2012 Haida Gwaii earthquake. The model/data comparison shows the TIDs are very consistent in time and space with the model simulated tsunami waves, offering insight with regard to the ionospheric response to the tsunami-driven atmospheric gravity wave.