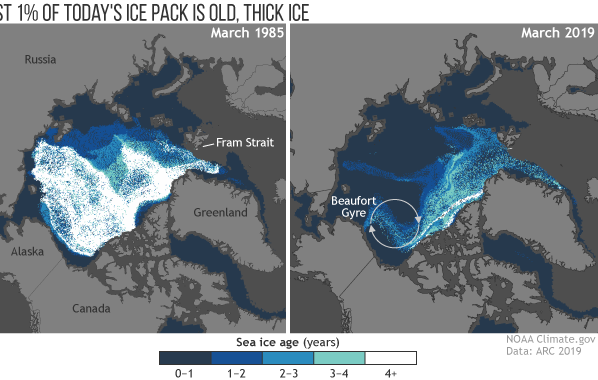 The proportion of old, thick ice in the Arctic's winter maximum ice pack has dropped from more than a third in the mid-1980s to barely just 1 percent today. See more visual highlights: https://www.climate.gov/news-features/understanding-climate/2019-arctic-report-card-visual-highlights

NOAA recently released the 2019 Arctic Report Card at the American Geophysical Union Fall Meeting providing updates on the ongoing impact of changing conditions in the Arctic on the environment and communities, especially from continued warming and record sea ice loss. This work brings together 81 scientists from 12 nations to provide the latest in peer-reviewed, actionable environmental information on the current state of the Arctic environmental system relative to historical records.

The average annual land surface air temperature north of 60° N for October 2018-August 2019 was the second warmest since 1900. The warming air temperatures are driving changes in the Arctic environment that affect ecosystems and communities on a regional and global scale.

In the marine environment, ​August mean sea surface temperatures in 2019 were 1-7°C warmer than the 1982-2010 August mean in the Beaufort and Chukchi Seas, the Laptev Sea, and Baffin Bay. Arctic sea ice extent at the end of summer 2019 was tied with 2007 and 2016 as the second lowest since satellite observations began in 1979. The thickness of the sea ice has also decreased, resulting in an ice cover that is more vulnerable to warming air and ocean temperatures. The winter sea ice extent in 2019 narrowly missed surpassing the record low set in 2018, leading to record-breaking warm ocean temperatures in 2019 on the southern shelf. Bottom temperatures on the northern Bering shelf exceeded 4°C for the first time in November 2018. Bering and Barents Seas fisheries have experienced a northerly shift in the distribution of subarctic and Arctic fish species, linked to the loss of sea ice and changes in bottom water temperature.

Less than 1 percent of Arctic ice has survived four or more summers​ In March 1985, sea ice at least four years old made up 33 percent of the ice pack in the Arctic Ocean; in March 2019, ice that old made up 1.2 percent of the pack. Instead, more than three-quarters of the winter ice pack today consists of thin ice that is just a few months old, whereas in the past it was just over half.

The NOAA Press Release can be found here.