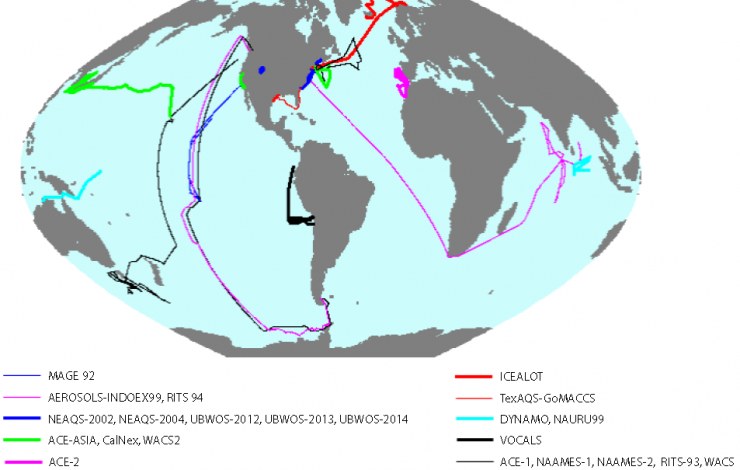 Map of PMEL Atmospheric Chemistry Cruises conducted between 1992 and 2016

Atmospheric aerosol particles affect the Earth’s radiation balance directly by scattering and absorbing incoming solar radiation. In addition, aerosol particles are required for clouds to form. Particles serve as surfaces for water vapor to condense onto which allows droplets to grow large enough to form clouds. The particles that nucleate cloud droplets are called cloud condensation nuclei, or CCN. Through these mechanisms, aerosols lead to changes in regional climate, atmospheric circulation, clouds, and precipitation. Despite the significance of these impacts, aerosols are the largest source of uncertainty in model simulations of human-induced changes in the Earth’s radiation balance since pre-industrial times. In attempts to reduce this uncertainty, model simulations have incorporated increased complexity in how they handle the formation and growth of aerosol particles in the atmosphere and interactions between particles and clouds. Evaluating the accuracy of these simulations on regional to global scales is difficult, however, as it requires extensive measurements of aerosol properties that are not available from satellite observations.

As reported by Reddington et al. (2017), the Global Aerosol Synthesis and Science Project (GASSP)  is an international collaboration of atmospheric modelers and aerosol measurement scientists aimed at reducing the uncertainty in simulated aerosol radiative forcing through the use of measurements. Recognizing that the vast amount of existing aerosol data is underutilized due to lack of public access, measurements at a range of time scales, and variability in data format, GASSP has assembled these data into a harmonized global dataset for use in model evaluations. To date, the GASSP database contains 25 years of measurements collected from 350 ground stations and during 45,000 hours on ships and aircraft. PMEL’s contribution to the database includes 17 research cruises conducted between 1992 and 2014 covering the Pacific, Atlantic, Southern, Arctic, and Indian oceans. Aerosol properties in the database include number and mass concentrations as a function of particle size, CCN concentrations, and chemical composition. The goal is to make the dataset readily accessible with new data included as it becomes available.

One outcome of the Reddington et al. study was the geographical mapping of available aerosol data and the unsurprising conclusion that measurements have been biased toward the polluted Northern Hemisphere, leaving pristine continental and ocean regions underrepresented. Measurements in unpolluted regions provide information about aerosol concentrations and chemical composition in the preindustrial era before human emissions started to perturb the chemistry and radiation balance of Earth’s atmosphere. Understanding aerosol properties in the preindustrial era and in clean remote atmospheres is important for reducing uncertainties in modeling aerosol–cloud interactions because cloud properties (brightness, extent, lifetime) are highly sensitive to aerosol uncertainties under clean conditions. The authors found measurements at the surface in remote marine regions to be lacking, with the NOAA Pacific Marine Environmental Laboratory (PMEL) dataset being one of only a few available.

In a related article, Quinn et al. (2017) used data from seven of these PMEL Atmospheric Chemistry cruises to assess the importance of the impact of sea spray aerosol (SSA)  on cloud properties in clean, remote marine regions. The influence of SSA on cloud properties is thought to be particularly strong over remote ocean regions devoid of continental particles. Yet the contribution of SSA to the population of CCN in the marine surface atmosphere is poorly understood. Using a lognormal-mode-fitting procedure, Quinn et al. isolated SSA from measurements of the particle size distribution over the Pacific, Southern, Arctic, and Atlantic oceans to determine the contribution of SSA to the population of CCN in the surface marine atmosphere. It was found that SSA makes up a small fraction of the CCN and that, instead, CCN between 70ºS and 80ºN is composed primarily of non-sea-salt sulfate aerosols due to large-scale meteorological features that transport particles from the upper to the lower atmosphere. Open questions remain on the source of the sulfate and the relative importance of biogenic  (i.e., plant/animal-induced) versus anthropogenic  (human-induced) emissions. Similar to the Reddington et al. study, Quinn et al. concluded that measurements that provide additional seasonal and geographical coverage in remote regions are needed to further elucidate the impacts of aerosols on cloud properties and the Earth’s radiation balance.