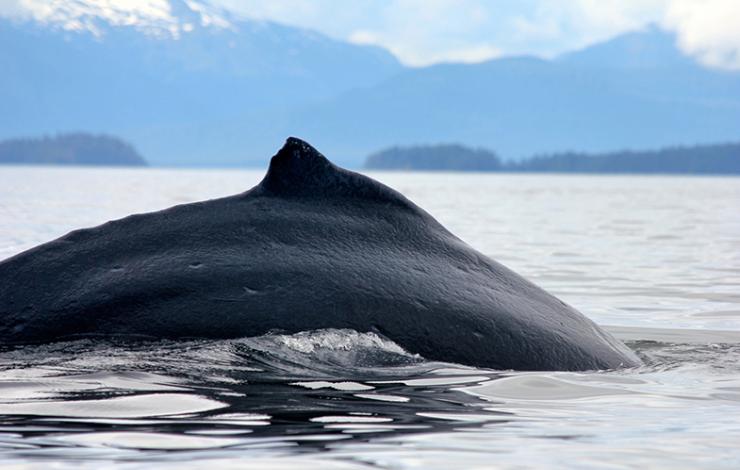 It’s unclear when the human fascination with the voices of humpback whales began, but with the release of the album “Songs of the Humpback Whale” in 1970, humpbacks became arguably the most listened to whales in the world. But humpback whales do more than sing: they also produce a series of vocalizations known as “calls” or “social calls”. While song is produced only by males, calls are produced by males and females of all ages, and are thought to play a critical role in the life history of humpback whales.

The modern world poses a problem for humpback whales that rely on sound; the ocean is getting louder. As the numbers of ships increase, and industrialization of marine space grows, humpback whales must contend with a much louder soundscape than the one in which they evolved. A recently published study led by former PMEL Ph.D. student Michelle Fournet investigated the impact of vessel noise on the calling behavior of humpback whales in Glacier Bay National Park and Preserve in southeast Alaska. The goal of the study was to assess whether humpback whales are adapting to a changing ocean soundscape and capable of making themselves heard above the noise.

Fournet and her coauthors (including PMEL's Dr. David K. Mellinger and Ph.D. student Samara Haver) found that humpbacks in Glacier Bay employ several strategies to deal with elevated ambient noise levels, and some seem more effective than others. As their environments get louder, humpback whales increase the loudness of their calls, similar to humans at a cocktail party. This strategy, known as the Lombard Effect, allows humpback whales to maintain communication across a wide range of acoustic conditions. However, humpback whales also employ a second strategy that seems to indicate less resilience to elevated noise, and anthropogenic noise in particular.

As ambient noise in the marine environment increases, humpback whales grow less likely to produce sounds. Moreover, if vessel noise is present in the environment, humpback whales are 31-45% less likely to produce calls than if only natural sounds are present. This is true despite similar ambient noise conditions. While the population level implications of this strategy are unknown, they are unlikely to be negligible.

For more information, visit these links: