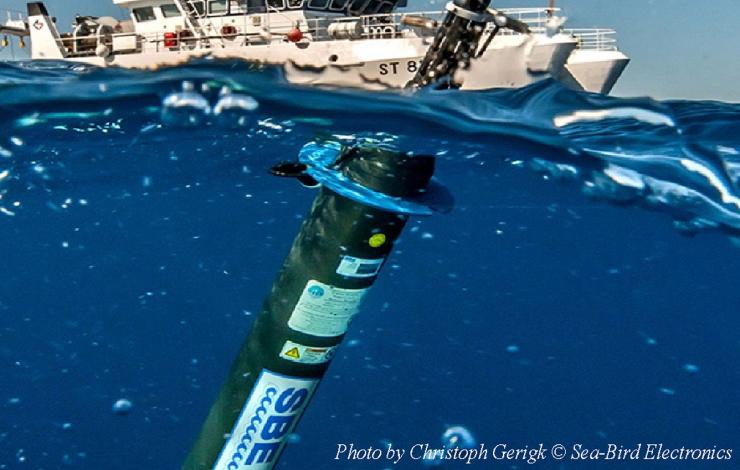 Microscopic organisms in the surface ocean, called phytoplankton, use photosynthesis to convert carbon dioxide into organic compounds like carbohydrates, fats, and proteins. Only a small fraction of this organic matter produced by phytoplankton is transferred (exported) to deeper layers of the ocean, either through sinking particles (a more efficient process) or downward mixing of dissolved carbon (a less efficient process). Characterizing the export of these carbon pools over time and space, and how it might be changing, is required to understand marine ecosystem functioning and to quantify the role of marine organisms in ocean carbon storage.

In a recently published study led by Dr. Yibin Huang, a joint postdoc at the University of California Santa Cruz and NOAA’s Pacific Marine Environmental Laboratory (PMEL), data from a biogeochemical (BGC) profiling float deployed in the Northeast Subarctic Pacific were used to evaluate the year-round cycling of carbon in the upper ocean. The science team, led by Dr. Andrea Fassbender of PMEL, developed a new approach that leverages observations from multiple chemical and bio-optical sensors on the BGC float to differentiate biological carbon production into distinct carbon pools: particulate inorganic carbon, particulate organic carbon, dissolved organic carbon, and sinking particles. By resolving the seasonality of carbon production, recycling, and export with the autonomous platform, the researchers uncovered a series of unique phenomena in the Northeast Pacific. One key finding from this work is that the dissolved organic carbon produced during spring and summer acts to fuel net ecosystem heterotrophy during winter; however, the production and export of particulate organic carbon also occurs during this heterotrophic period. Though wintertime particle production is small, physical ocean mixing plays an important role in augmenting the efficiency at which these particles are transferred from the surface to depth. In addition, the researchers identified a potential mechanism driving elevated summertime particle export efficiency: summertime increases in the fraction of the large particles (>100 micrometre (μm)), which are thought to have a faster gravitational sinking velocity.

This study introduces a new method  to quantify key, nuanced carbon cycle processes in a robust and cost-effective manner. In particular, the method helps to bridge a gap between in situ and remote carbon cycle observing by incorporating information from both chemical tracers (which track the integrated biological signature) and bio-optical tracers (which track the immediate biological signature) to provide in situ estimates of carbon export and it’s efficiency. This method holds promise for wide scale application to the growing BGC Argo float array and for advancing our understanding of fundamental processes that control carbon storage in the World’s ocean.