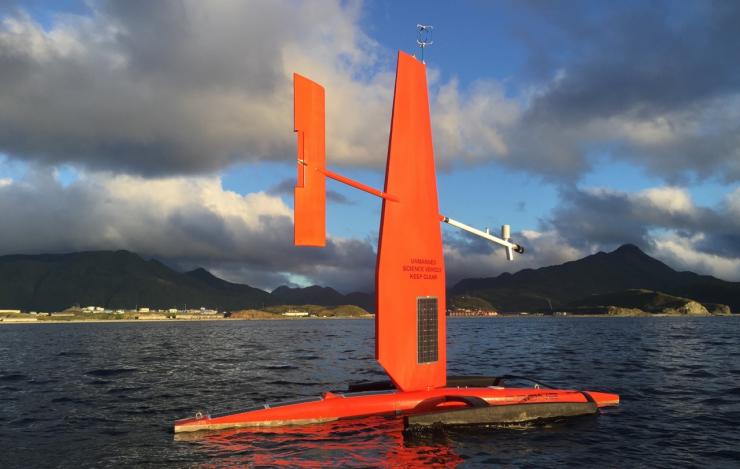 A Saildrone departs Dutch Harbor, AK in 2016 on it's way to test sensors on this platform for multi-disciplinary science

The Saildrone is an autonomous surface vehicle outfitted with meteorological and oceanographic sensors, including passive and active acoustics. In 2016, NOAA used the Saildrone to survey the Bering Sea, a region known for its harsh conditions (e.g., storms, low light, biofouling) and high level of biological productivity. The mission was a success, and the Saildrone proved to be effective at augmenting historical walleye pollock surveys, listening for critically endangered whales, and surveying fish abundance while northern fur seals were eating in near-real time.

The innovative platform performed well and demonstrated its potential to advance ecosystem research. Cross-comparison of sensors between the Saildrone from a known mooring site and the NOAA Ship Oscar Dyson show that the Saildrones provide high-quality meteorological and oceanographic data. On two occasions, NOAA Ship Oscar Dyson trailed behind a Saildrone to compare active acoustic systems under varying weather conditions.

Notable findings from this mission:

Three Saildrones are currently in operation in the Bering and Chukchi seas. You can follow these Saildrones on the mission blog.