About the North Pole Web Cam Images in 2003

Read the essay on the puzzling summertime of 2003 as observed by the North Pole Web Cams and view animations from the 2003 web cam 1 and 2 (small) and web cam 1 (large).

Links to the images are in the table at the bottom of the page (by year) and on the Web Cam home page. 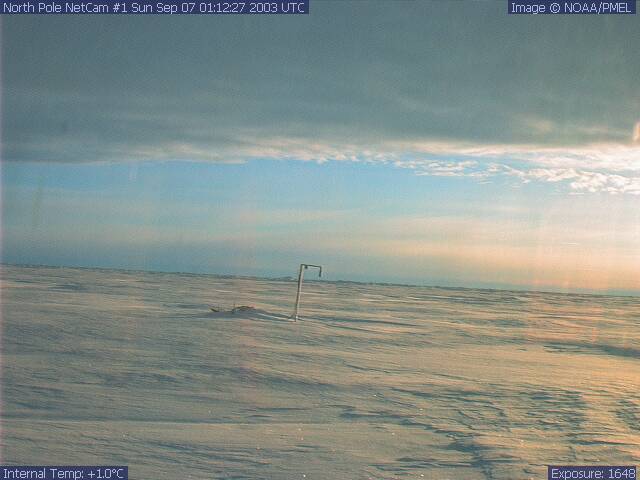 NOAA/PMEL's first North Pole Web Cam was deployed on April 28, 2002. In order to conserve power and reduce satellite transmission time, web cams are programmed to send a limited number of images per day from the North Pole. The cameras are dynamically programmable, so PMEL can communicate with the cameras to change the configuration (camera angle, zoom, frequency of photos, etc.) at any time. The images from the camera track the North Pole snow cover, weather conditions and the status of PMEL's North Pole instrumentation, which includes meteorological and ice sensors (seen in the camera images).

Web cams are deployed in the spring and transmit images throughout the sunlit summer months. The North Pole is in winter darkness from October until March.

Time/date of photographs: The photograph was taken at the date and time shown at the top of the image. The date/time is given as Greenwich Mean Time (GMT), which is the time at the "Greenwich meridian", a north-south longitude line passing through Greenwich, England. (GMT is also called UTC, or Universal Coordinated Time). To convert the GMT/UTC to the U.S. East Coast time zone, subtract 4 hours. To convert the GMT/UTC to the US West Coast or Pacific time zone, subtract 7 hours from the GMT/UTC time. Ignore the number shown in the lower right corner of the image, which is an internal camera system number.

Colors in the photographs: One point to notice is that the midnight sun is already above the horizon 24 hours a day at this location for the first of May. The colors you see in the photographs are correct. For example the rosy colors in the image to the right are normal twilight colors at the North Pole.