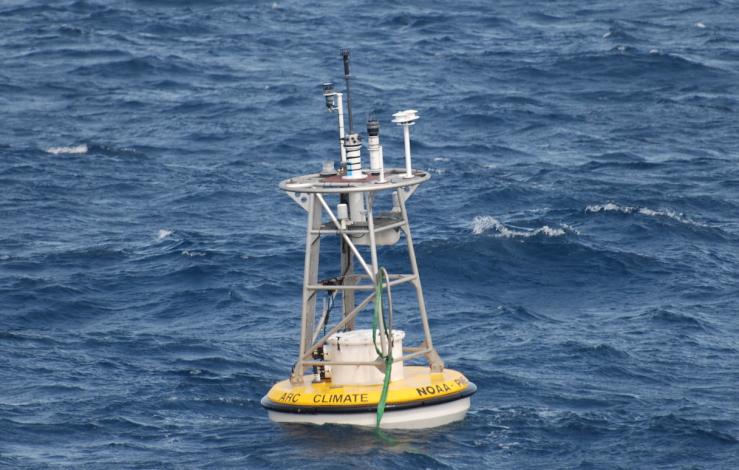 To better understand the effects of the ocean on global climate and weather, scientists from NOAA’s Pacific Marine Environmental Laboratory, or PMEL, deployed an Ocean Climate Station mooring — an anchored buoy —on the edge of the warm Agulhas Return Current (ARC) southeast of South Africa. Although there is an array of climate buoys positioned in the tropics, this is one of only two deep ocean climate buoys positioned below the Tropic of Capricorn; the other is located south of Australia. The buoy is part of NOAA's climate observation and monitoring efforts.

“With this mooring, we will be able to measure how this powerful current warms the atmosphere and some of the effects this has on the local meteorology and climate,” said Meghan Cronin, Ph.D., principal investigator and oceanographer at PMEL. “More heat is released to the atmosphere in the ARC region than anywhere else in the entire Southern Hemisphere. This heating can affect winds, clouds and rainfall over a broad region.”

The ARC is a western boundary current, similar to the Gulf Stream in the North Atlantic and the Kuroshiro Extension in the North Pacific. With support from NOAA and the National Science Foundation, NOAA’s PMEL designed, built and deployed the heavily instrumented ARC surface mooring to monitor weather and compute the heat absorbed and released by this region of the ocean. Sensors include those that measure wind, air temperature, relative humidity, rain, solar and infrared radiation, barometric pressure, sea surface temperature and salinity, and near-surface currents.

“The buoy will also carry sensors to measure how much atmospheric carbon dioxide is absorbed into the ocean in this critical region for the global climate system,” said Christopher Sabine, Ph.D., oceanographer at PMEL and participant in the ARC project.

“Building a buoy to collect and transmit reliable data requires teamwork between the engineers and the scientists,” said Chris Meinig, director of PMEL engineering, whose group designed and built the buoy. “Because of the location off South Africa, we had to carefully design, model and build something that has a chance of withstanding the violent weather, steep waves and strong currents.”

With the use of ship time provided by the Agulhas and Somali Current Large Marine Ecosystems Project, the mooring was deployed in 4,300 meters (12,900 feet) of water using the South African Fisheries Research Ship Algoa. Data are relayed to shore in near-real time and made available through PMEL and other climate and weather data centers. The ARC buoy is a member of the family of Ocean Climate Stations, which include Kuroshio Extension Observatory located east of Japan and Station Papa located in the Gulf of Alaska. These moorings act as reference stations for validating satellite observations and improving weather forecasting and climate models.

The FRS Algoa also deployed two free-floating buoys, or drifters, provided by the NOAA Adopt-a-Drifter program, which will be part of the Global Drifter Array. These drifters measure surface temperature, current velocity and atmospheric barometric pressure. Students from Washington state and South Africa will track the drifters online and try to predict where they might go and why.

NOAA’s mission is to understand and predict changes in the Earth's environment, from the depths of the ocean to the surface of the sun, and to conserve and manage our coastal and marine resources. Find us online and on Facebook.