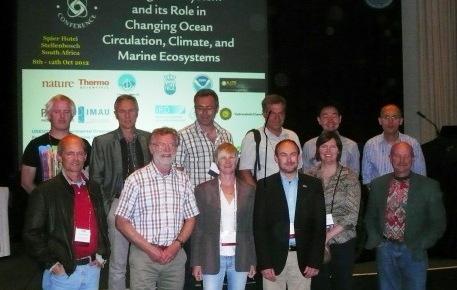 Attendees of the Chapman Conference in Stellenbosch, South Africa, October 2012.

The Agulhas System conference brought together scientists from around the world. The goals were to identify the most pressing questions and design modeling experiments that would allow researchers to learn more about the role of the Agulhas system in climate from regional to global scales.

While attending the conference, PMEL's Dr. Meghan Cronin visited Sophumelela High School in the township of Phillipi in South Africa recently. Her experience is described below:

Through efforts of Juliet Hermes and Thomas Mtontsi of SAEON, Dr. Meghan Cronin (NOAA) and Prof. Lisa Beal (U. Miami) were able to visit Mr. Ndemane's science classes (~ 60 learners) at Sophumelela High School in the township of Phillipi on the Cape Flats outside of Cape Town. Meghan Cronin's 13-year-old daughter, Fiona McCully, also went into a classroom for peer-to-peer discussions.

A small group of Mr. Ndemane's class have been involved in SAEON's Learner program, and the full class was involved in the NOAA Adopt A Drifter program (ADP). As part of the NOAA ADP, 3 pairs of drifters were deployed in the Agulhas Current. During the presentation, Cronin and Beal introduced ocean currents to the Learners and their impact on sea surface temperature (SST) and climate. After showing a movie of the Agulhas system's SST produced from a numerical model at NOAA GFDL, the learners were asked which ocean the drifters would end up in and whether and when the drifter pairs would separate. Results of the experiment were then presented: 5 of the 6 drifters ended up in the S. Indian Ocean.

Data from these drifters contribute to the NOAA Global Drifter Program (GDP), a component of the Global Ocean Observing System, and can be viewed from both the GDP webpage and the NOAA ADP webpage .

Cronin presented a poster on the NOAA ADP at the Chapman Conference, which included co-authors from NOAA, SAEON, South Africa Weather Service, ASCLME, and Globe Africa. A University of Cape Town student will be lead author on a scientific manuscript describing this drifter experiment. The Sophumelela High School learners were clearly engaged by the visit. At the end, one learner stood up and thanked Cronin and Beal for encouraging them to be scientists and believing that it was possible. Another learner from the SAEON program came up afterwards to ask for advice on a science fair project on climate change. In turn, as a thank you for being invited into the classes, Cronin gave a personal gift of DK Reference World Atlases to the classes and to Mr. Mtontsi, and Beal gave a personal gift of blow up Earth globes with currents marked on the oceans.