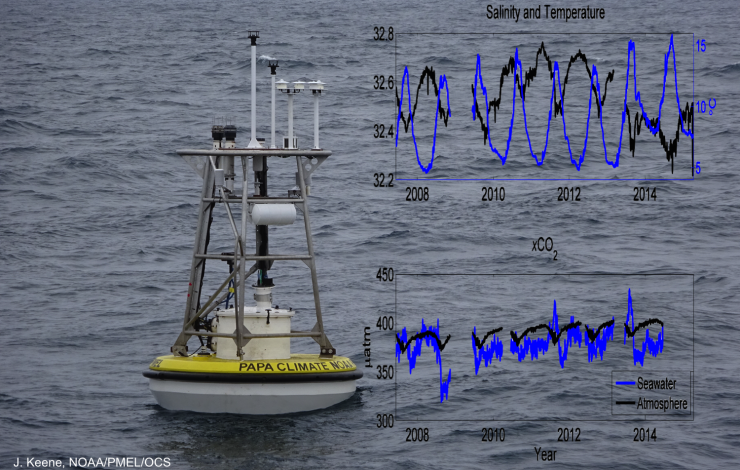 OCS Principal Investigator Dr. Meghan Cronin and her co-authors examined the exchanges of heat and salt affecting the mixed water layer of the upper ocean, since exchanges of heat and freshwater between the ocean and the atmosphere can have an effect on weather and climate.  Using data from the OCS KEO and Papa moorings, satellites, Argo floats, and a glider, the authors calculated and closed the heat budget for the mixed layer at both KEO and Station Papa, and also closed the salt budget at Papa.  The good agreement between the diffusive coefficients from the heat and salt budgets suggested that this coefficient could be used to help close the mixed layer budgets of other ocean properties.

Building on these results, PMEL Carbon Program scientist Dr. Andrea Fassbender and her co-authors used this coefficient to close the carbon budget at Station Papa.  The authors analyzed seven years of carbon observations from the OCS Papa mooring, along with data from research vessels, satellites, and a glider.  From this, they were able to study seasonal carbon exchanges, and evaluate the amount of carbon going into the deep sea.  This study provided new insights about the carbon cycle and climate responses in this region.

The PMEL OCS and Carbon groups have worked together for over a decade, deploying moorings and instrumentation in the North Pacific.  Both the partnership and the mooring measurements have advanced understanding of the roles of ocean processes in the Earth’s climate system.