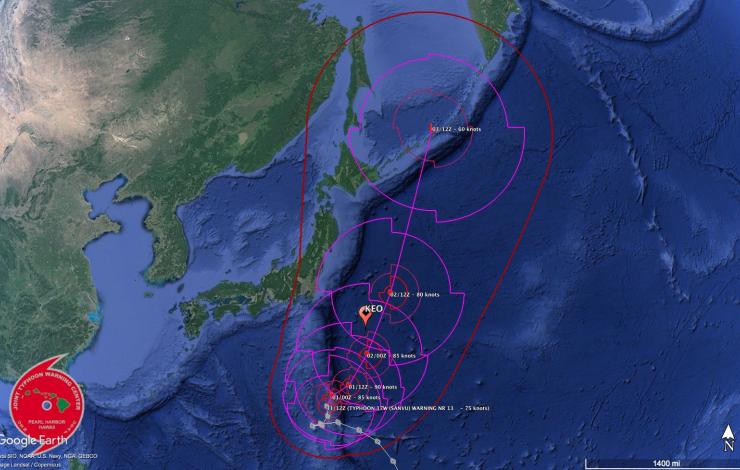 Typhoon Sanvu, the first big storm of the 2017 North Pacific season, will be passing nearly directly over the OCS KEO mooring between September 1st and 2nd, 2017.

The current forecast from the Joint Typhoon Warning Center (JTWC) has the eye passing very near the buoy, which is likely to experience some of the strongest winds.  Sanvu is expected to achieve peak wind gusts to around 110 knots as it passes KEO.  Impressive wave heights approaching 16m (>50 ft!) could be present near the storm’s center.

After passing the KEO mooring, the storm is expected to accelerate to the northeast.  As Sanvu becomes embedded in a mid-latitude trough, increased shear will quickly erode the storm’s strength, and it is not expect to pose much threat to land.

The KEO mooring is often in the path of large storms, and scientists use the data to analyze and improve forecasting models.  Higher than average sea surface temperatures, known to contribute to cyclone intensification, were also observed preceding Hurricane Harvey, which recently caused devastating damage in Texas.  By learning more about these storms and how they behave, we hope to help prepare a more weather-ready nation.

By:  Nathan Anderson and Jennifer Keene