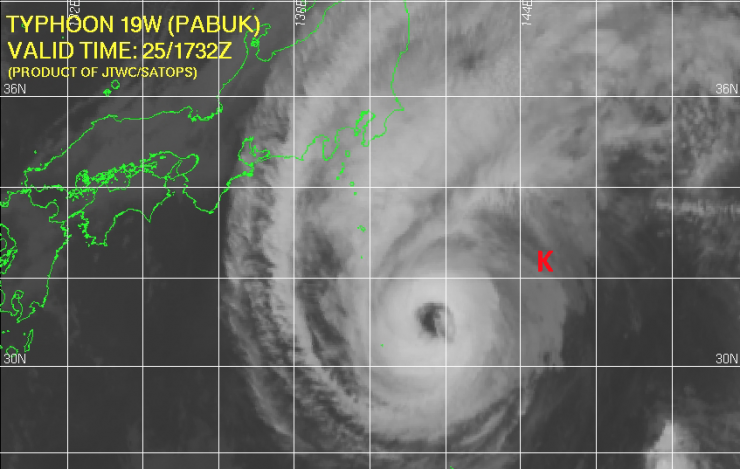 Typhoon Pabuk, a category 1 tropical cyclone, passed 80 km to the west of NOAA's Kuroshio Extension Observatory (KEO) mooring on 26 September 2013. This was followed by Typhoon Wipha on 15 October 2013, and Francisco on 26 October 2013.

The measurements collected during Typhoon Pabuk will constitute one of the most comprehensive data sets of ocean conditions on the eastern side of a tropical cyclone. In particular this data set will provide the opportunities for comparisons with the conditions observed by KEO during the passage of Typhoon Choi-Wan on 19 September 2009. During that storm, KEO was ~ 40 km to the west of the eye. Both Choi-Wan and Pabuk were beginning to transition to extratropical storms as they passed KEO, much as Hurricane Sandy was when it made landfall.

The other two storms passed farther to the north of the KEO mooring. Interesting and meaningful data were acquired from the outer edges of these storms. Analysis of air-sea interactions at KEO during the passage of typhoons will contribute to better understanding and prediction of tropical cyclones worldwide.

The PMEL KEO mooring is part of a global network of time series reference stations. It carries a suite of sensors to monitor the ocean-atmosphere exchanges of heat, moisture, momentum and CO2, ocean acidification, and the upper ocean physical state. Because of the strong currents, relatively frequent tropical cyclones (typhoons), and powerful winter storms, KEO is designed for rugged conditions.