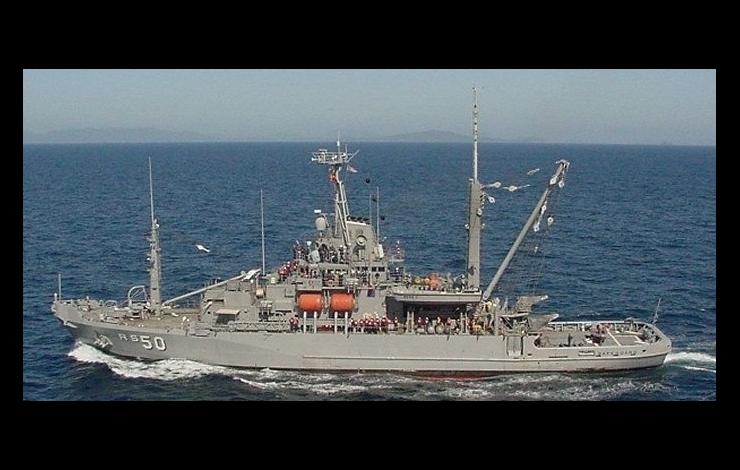 An innovative partnership between NOAA and the US Navy brings research scientists one step closer to understanding the intricate relationship between the atmosphere and ocean that will help lead to improved predictability of weather, global climate, and changes in the ocean environment. On Nov 14th, scientists from NOAA's Pacific Marine Environmental Laboratory (PMEL), onboard the US Navy's Military Sealift Command ship USNS SAFEGUARD deployed an upgraded Ocean Climate Station Mooring on the southern edge of the Kuroshio Extension Current, 340 miles SE of Tokyo, Japan. The crew of the USNS SAFEGUARD successfully and safely deployed the 9 ft diameter surface buoy, which weighs 2900 lbs, and the 5 miles of wire and nylon line used to anchor the mooring in 18,700 feet of water.

The ship time needed to safely service this mooring, and to recover the prior mooring with its load of expensive sensors and irreplaceable data, was made available through a joint partnership between NOAA and the United States Navy's Military Sealift Command. USNS SAFEGUARD (T-ARS-50), a 255-foot salvage vessel assigned to the Naval Fleet Auxiliary Force stationed with the US Navy's 7th Fleet out of Yokosuka, Japan, is a U.S. ship already stationed in the area, thus reducing the overall expense of maintaining this ocean observatory.

NOAA's mission is to understand and predict changes in the Earth's environment, from the depths of the ocean to the surface of the sun, and to conserve and manage our coastal and marine resources. KEO is funded by the NOAA's Climate Program Office