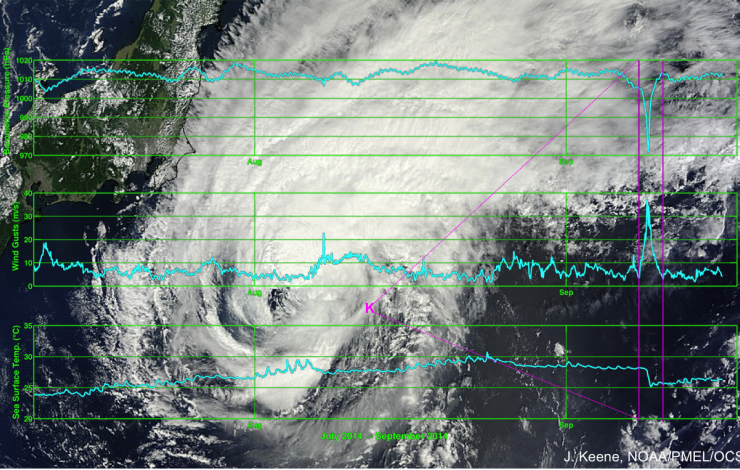 The tropical cyclone Fengshen, named for the god of wind in Mandarin Chinese, passed over the NOAA mooring at the Kuroshio Extension Observatory (KEO) on September 8-9, 2014 GMT. The KEO mooring is located off the coast of Japan, where tropical cyclones and typhoons pass regularly during the autumn storm season. KEO has been specially adapted to be a "storm mooring," built to withstand extreme conditions, and also send data back to shore once per hour to allow scientists to monitor events in near real-time.

The buoy functioned exactly as planned throughout the storm, and a complete data record was captured. Barometric pressure dropped to a low of 971.5 hPa during the storm, and wind gusts reached 37 m/s (83 mph). The sea surface temperature dipped drastically from around 28°C to almost 25°C in just a few hours due to enhanced mixing of surface waters with cooler waters below.

With access to typhoon data in near real-time, scientists are able to verify and improve the accuracy of forecasts and storm prediction models. Researchers from NOAA's Pacific Marine Environmental Lab (PMEL), who deployed the KEO mooring, are working with partners at the NOAA's Environmental Modeling Center (EMC) to do just that. Model improvements can also be applied to hurricane forecasts for storms that might impact the east coast of the U.S.

The PMEL KEO mooring is part of a global network of time series reference stations. It carries a suite of sensors to monitor the ocean-atmosphere exchanges of heat, moisture, momentum and CO2, ocean acidification, and the upper ocean physical state. Deep ocean temperature and salinity are also measured by an instrument just above the sea floor.