Home / What We Do / Science

The US Arctic and Bering Sea are big, remote, and harsh environments. To better study these marine ecosystems and the rapid changes that are occurring, the Innovative Technology for Arctic Exploration (ITAE) program is developing innovative technologies, including sensors and platforms, to meet the scientific demand in these regions. The mission of the ITAE program is to conceptualize and build effective research equipment for the assessment of the Arctic environment and ecosystem with the operation of high-resolution sensors on autonomous platforms near sea ice. The dynamic and ﬁne-­scale nature of these regions requires responsive, high-­resolution data collection over large areas in real time — a logistical challenge ideally suited to fast, mobile autonomous platforms rather than traditional ship-based operations.  Existing autonomous platforms are both small and slow, limiting the observational capacity, responsiveness, and deployment capabilities. ITAE is a collaborative research effort by University of Washington (JISAO) and NOAA engineers and scientists at the Pacific Marine Environmental Lab (PMEL). See what we are working on below! 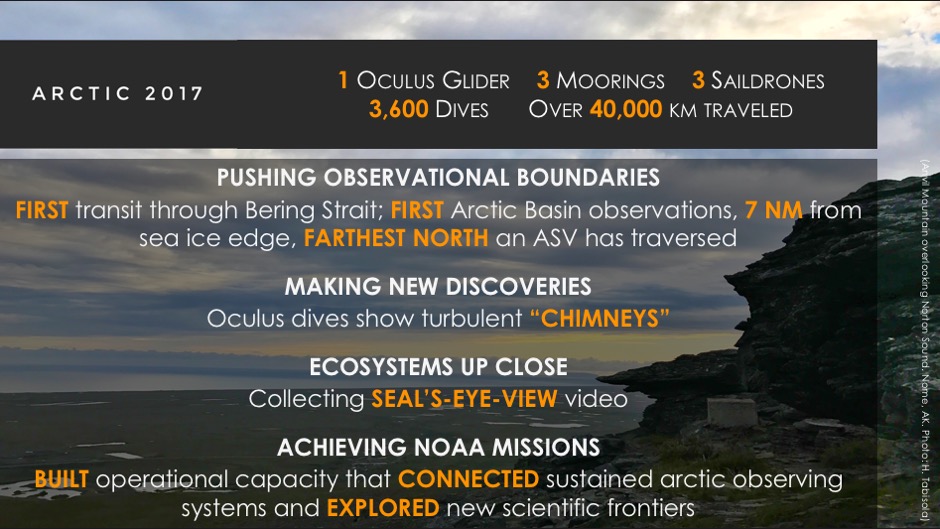 This is the first of our collaborative projects to launch! The Saildrone is a wind powered autonomous (which means there are no people) vehicle controlled from shore through satellite communications. This is the first test of a Saildrone both north of (above) 53° N and with scientific equipment. Engineers at PMEL worked closely with Saildrone Inc. to incorporate scientists data requests with this amazing platform by which to conduct research.

What makes the Saildrone not only cool but useful for scientists? A research boat is the common platform by which we conduct our measurements in the ocean. But, ship-based operations are costly, must be planned far in advance, and often do not have the ability for quick responsive sampling. A Saildrone can be launched from a dock and operate 2 – 5 times faster than other available autonomous vehicles, creating opportunities for longer, more flexible research deployments that can cover greater distances. Speed is a critical factor for working in rapidly shifting ice environments like the Bering and Chukchi Seas - to not only avoid hazards but for quick access as the ice retreats. A Saildrone's is big too — reaching 20 ft above the waters surface and 19 feet long. This size let's the Saildrone carry equipment weighing up to 200 pounds. The Saildrone's operating electronics rely on solar power. To cope with light in limited light environments like the US Arctic, the power storage capacity of the solar cells is very large and conversely, operations use small amounts of power, allowing for reliable communication and navigation.

Utilizing the concepts of sailing ships - this high-tech autonomous vehicle might conquer the oceans as it endeavors to change how we conduct research and even travel. Read more about Richard Jenkins amazing story – from his quest for the fastest over land-sailing speed record of his Greenbird project to his successful vision of an oceangoing drone. 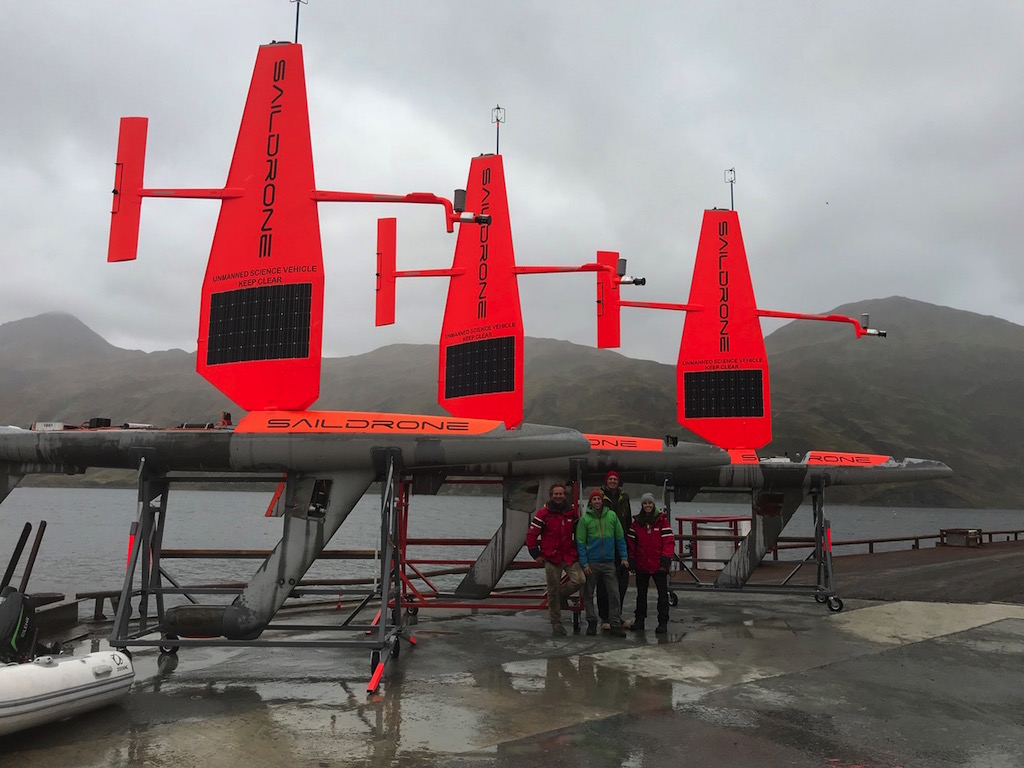 Our project now has three moorings: two of which are primarily Prawler focused and a third to test an in-situ alkalinity sensor in frigid Arctic waters.

In 2015, a cornerstone of the Arctic project, this was the first mooring of it's kind developed specifically to quantify the impacts of heat transfer between the US Arctic oceans and the atmosphere. A topic scientists, at this time, know very little about. Below the surface buoy was a Prawler (a Profiling Crawler), a NOAA designed system that harnesses wave energy to climb up and down the mooring line collecting vertical water profiles of temperature, salinity and dissolved oxygen, controlled remotely, in real-time. In 2016, a modified version of this mooring was then tested at the long-term mooring site M2 in the southeastern Bering Sea. In 2017, we have redeployed a Prawler mooring in both the southeastern Bering Sea (April-September) and the Chukchi Sea (July-September). The radiometer sensor, an SPN1 from Direct-T Devices, was removed and is now being evaluated for use on an operating Saildrone in the Equatorial Pacific. 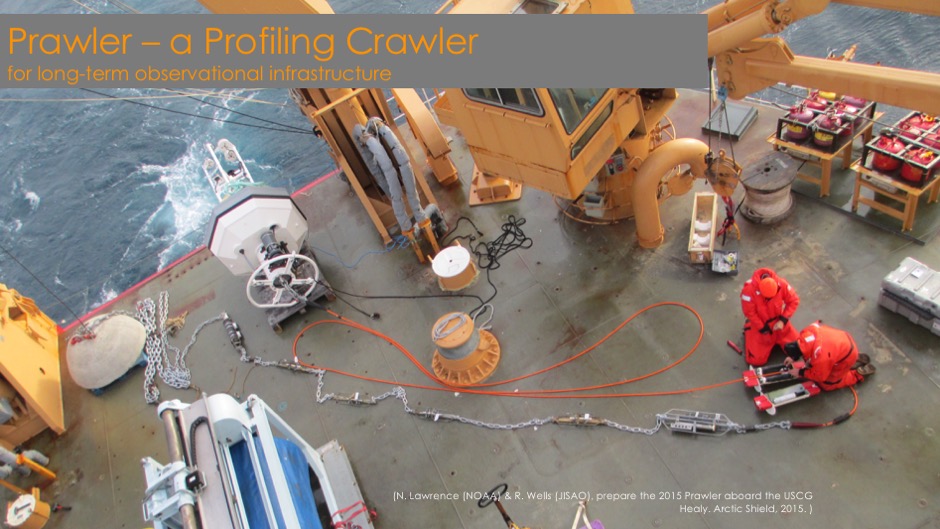 Overview of Prawler during a 2015 launch from the USCG Cutter Healy. Photo: NOAA

The ability to measure alkalinity is a key need for studying the productivity of shell (calcium carbonate) forming organisms - organisms that are most affected by ocean acidification. Total Alkalinity (TA) is one of the four measurable dissolved inorganic carbon parameters and is therefore of paramount importance in the study of carbon cycling in the oceans. TA is commonly measured as part of shipboard hydrographic surveys and ocean time-series, but an in-situ sensor is now on the horizon with successful deployments in Hawaii. The sensor uses a simplified method that makes autonomous underwater measurements possible. However, it has not yet been commercialized and is in need of further testing in different environments such as the Arctic Ocean. If successful, this instrument development will provide an important tool for understanding the vulnerability and response of marine ecosystems to acidification. Successful commercialization of the alkalinity sensor will greatly broaden the impacts of the technology, making it available to the ocean sciences community.  The short deployment in the Arctic is an ideal opportunity to test the instrument in an area that is undergoing rapid change, and a high priority for TA studies. This work is in collaboration with Sunburst Sensors.

Conditions just under Arctic sea ice during Winter and Spring months are largely a mystery, but we do know they play a critical role in shaping one of the world’s most highly productive ecosystems during the ice-free Summer months. To answer this question, a new under-ice mooring, capable of collecting oceanographic data at the water-ice boundary during these vital periods was designed. Still in the first stages of development, this Expendable Float or ExFloat buoys will collect data on temperature, depth, and Photosynthetic Active Radiation and transmit the data to shore once free of the ice.  The innovative design uses satellite tags (originally designed for cetaceans by the Sea Mammal Research Unit at the University of St. Andrews Scotland, UK) 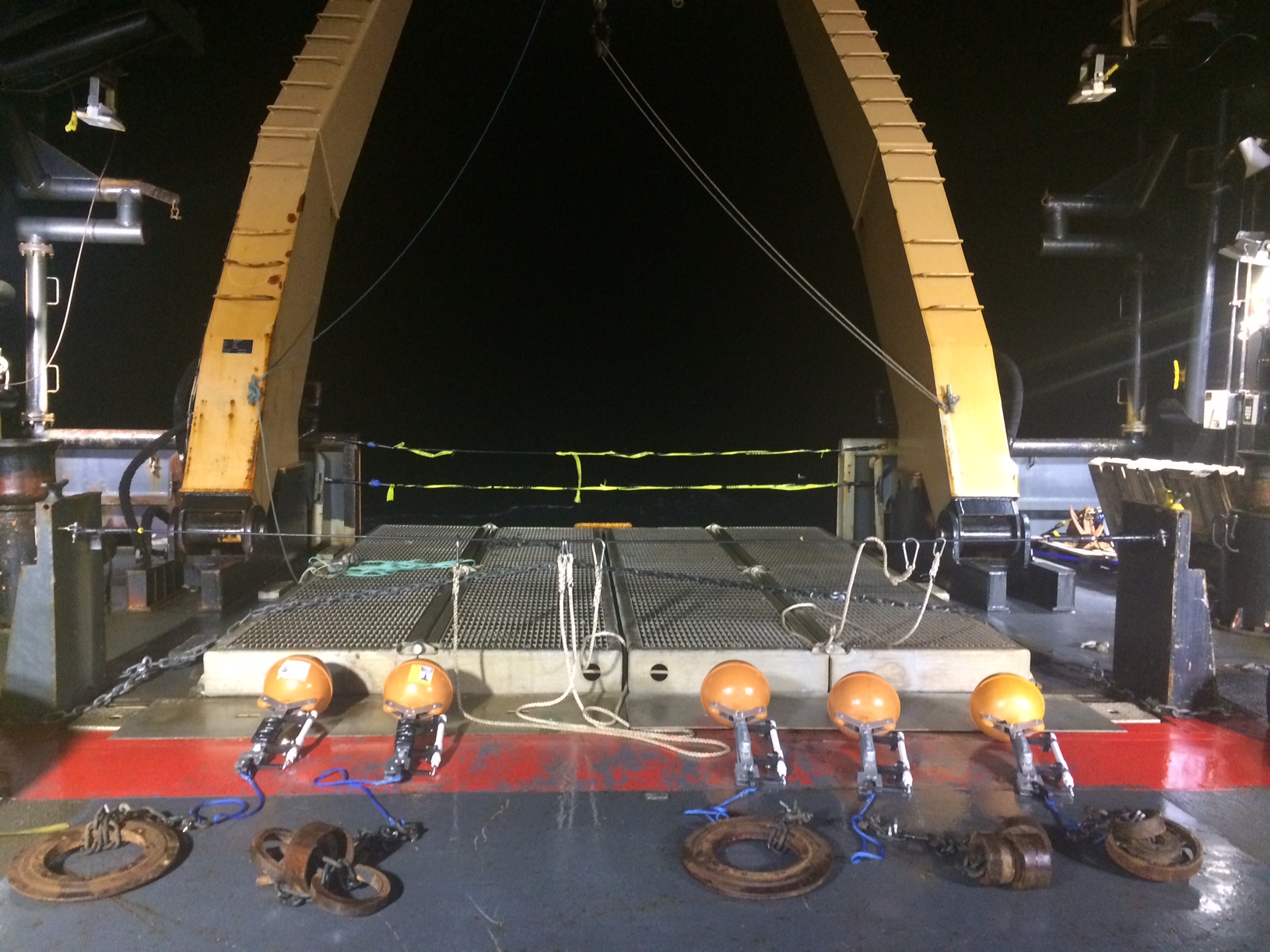 The AIr Launched Autonomous Micro Observer, or ALAMO float, is an Argo surface ocean float designed for deployment from an aircraft, built by MRV Systems, LLC. The float is currently being modified for operations under sea ice. This includes an ice-reinforced assembly, new algorithms for sensing and profiling while underneath the ice, and incorporation of additional sensors (CTD, PAR, fluorescence). The float can be programmed to rest along the bottom between profiles. The goal is to obtain profile and under-ice data that can be integrated with PMEL moored observatory measurements from the Chukchi Sea. This development is in collaboration with the Arctic Heat Open Science Experiment.

The Oculus is a coastal glider catered to the shallow depths of the Arctic. By using a rapid buoyancy system this glider can change buoyancy states 20 times faster and achieve speeds three times faster than legacy gliders'- allowing for a more efficient and adaptive Arctic survey, but transferable to a variety of markets 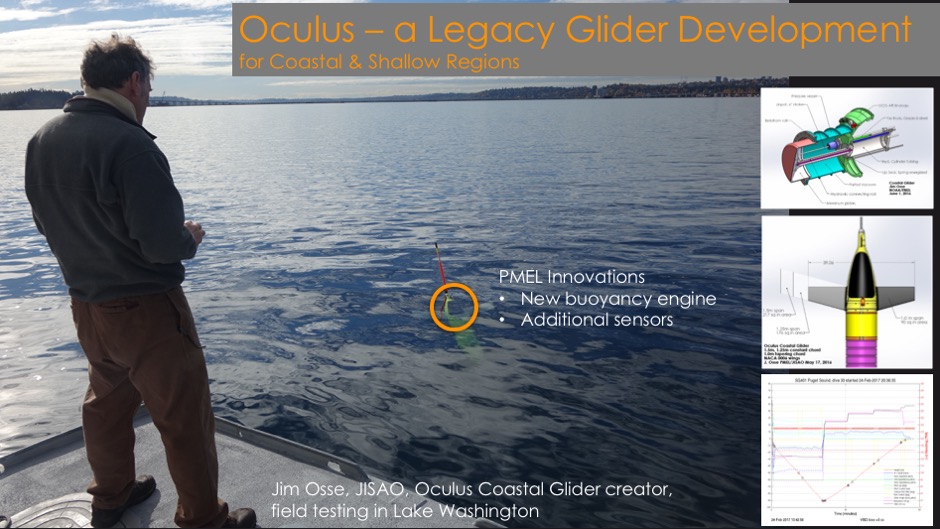 The Ecosystem and Carbon Wave Gliders were the second platform type to launch in 2015. The Wave Glider is a remotely controlled autonomous vehicle consisting of a surfboard-like surface float with solar panels to power communications and instrumentation, a louvered submarine that converts wave energy into thrust and a tether that connects the float to the submarine. ITAE deployed two Wave Gliders outfitted with different sensors; the Carbon Wave Glider and the Ecosystem Wave Glider.

The Carbon Wave Glider was designed to measure changes in the ocean and atmospheric carbon concentrations to answer the question on how these changes may influence ocean acidification. Sensors on the platform measure pCO2, and the pH, temperature, salinity and dissolved oxygen concentration of the water.

The Ecosystem Wave Glider was designed to measure freshening of the sea water shortly following ice retreat, the accumulation of heat in this fresher upper water column and how phytoplankton respond to these changes. Sensors on the platform measure ocean salinity and chlorophyll fluorescence, and also profile temperatures in the upper seven meters via instrumentation on the tether. 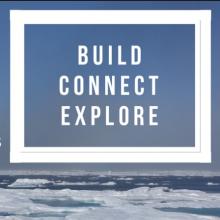 Service
Sharing our knowledge and collected information of new observation platforms and sensors to advance ocean observations pole to pole. 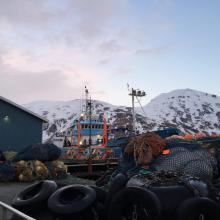 What We Do
NOAA's Mission: Science, Service and Stewardship