Innovative Technology for Arctic Exploration (ITAE) is a collaborative effort of scientists and engineers at NOAA's Pacific Marine Environmental Lab (PMEL) and the University of Washington's Joint Institute for the Study of Atmosphere and Ocean (JISAO). ITAE is a highly collaborative program working with many partners including Saildrone, Inc.

Dr. CALVIN MORDY is the co-lead for the ITAE program. Dr. Mordy is an Oceanographer at Pacific Marine Environmental Lab through the University of Washington's Joint Institute for the Study of Atmosphere and Ocean in Seattle, WA. His work has taken him from Antarctica to the US Arctic studying nutrients in the ocean. His work focus is on climate and ecosystem research in the Bering Sea, Gulf of Alaska, and Aleutian Passes. He is even the recipient of the Antarctic Service Medal of the United States (1999) - as part of an expedition (camping on an ice floe) . The medal is awarded to any member of the Armed Forces of the United States, U.S. citizen, or resident alien of the United States, who deploy to an Antarctic research station or vessel and remain south of 60 degrees South latitude for a set period of time. Read about one of his adventures - written in Scientific American.

CHRISTIAN MEINIG is the co-lead for the ITAE program. He is an Engineer at the Pacific Marine Environmental Lab in Seattle, WA. As the Director of Engineering, he leads a diverse team of engineers and technicians specializing in the research, development and deployment of ocean and atmospheric instruments and observing platforms. His work is global in scope and includes working with platforms such as moorings, ships, underwater gliders, wave gliders, and the Saildrone. Hear about one of his many exciting projects via a radio interview with Seattle's public radio station KUOW.

Dr. JESSICA CROSS is the co-lead for the ITAE program. She a Research Associate at the Pacific Marine Environmental Lab through the University of Alaska Fairbanks specializing in complex carbonate biogeochemistry in the Arctic. She works to synthesize dissolved carbon and alkalinity measurements, biological productivity and respiration rates and volumes, sea-air CO2 flux, and hydrographic observations to address ocean buffering capacity, carbonate mineral precipitation and dissolution, and conservative mixing signatures. She was recently named Chief Scientist for a 2015 NOAA expedition on the RV Ron Brown, part of the US Repeat Hydrography program, run by GO-SHIP that travels from Tahiti to Hawaii (far from the Arctic). Read about her exciting travels through their weekly reports or blog.

HEATHER TABISOLA is the Research Coordinator for the ITAE and Ecosystems and Fisheries-Oceanography Coordinated Investigations (EcoFOCI) programs at the Pacific Marine Environmental Lab through the University of Washington's Joint Institute for the Study of Atmosphere and Ocean in Seattle, WA. Her work prior, as a Marine Consultant, was a maelstrom of marine biologist, marine mammal observer, passive acoustic monitor, environmental compliance and government liaison, oceanographer, writer, and educator. In her many adventures she saw more open sea than land, but on the rare occasion, got to visit some of her most memorable places such as: Copenhagen, Denmark; Nuuk, Greenland; Punta del Este, Uruguay; and Luanda, Angola. Read more about her as the April 2015 JISAO Staff Spotlight.

Our program would not be able to accomplish what it does without the following experts:

Dr. EDWARD COKELET is a Physical Oceanographer at NOAA’s Pacific Marine Environmental Laboratory.  He studies the physical properties, circulation and sea ice in the Bering Sea and Gulf of Alaska. He has instrumented research ships and an Alaskan State ferry to make underway measurements of water temperature, salinity, phytoplankton nutrients, chlorophyll-a and dissolved oxygen in sea water sampled automatically as the ship steams along.

NOAH LAWRENCE-SLAVAS is an Engineer at the Pacific Marine Environmental Lab in Seattle, WA.

SHAUN BELL is a Research Scientist at the Pacific Marine Environmental Lab through the University of Washington's Joint Institute for the Study of Atmosphere and Ocean in Seattle, WA. Among his many talents, Shaun provides assistance in specialized subsets such as the ITAE data and develops visualizations for related data streams.

The Center for Environmental Visualization (CEV) at the University of Washington provided the initial website design and support for this project. 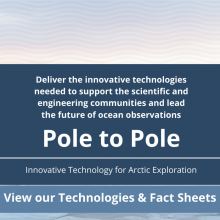 Science
View the various technologies ITAE is working on.

Service
Sharing our knowledge and collected information of new observation platforms and sensors to advance ocean observations pole to pole.