What could be mistaken for a surfboard missing its surfer is now the latest tool to help scientists take measurements for critical science missions at Pacific Marine Environmental Laboratory (PMEL).

"Wave gliders are quickly becoming the future of ocean research. They require no expensive research ships and can be deployed off the back of a small fishing vessel and run along pre-determined or custom courses. A single pilot with an internet connection can fly up to 10 at one time, depending on the mission," said Christian Meinig, Director of Engineering at PMEL.

Manufactured by Liquid Robotics, the wave gliders, classified as Unmanned Maritime Vehicles (UMV), are one of the latest technological advances in the field of autonomous vehicles. Each wave glider is made up of a 7-foot long surfboard-like float that is tethered to 23-foot-cord attached to a submerged glider that controls speed and direction.

The wave glider immediately converts wave motion into thrust, pulling the float along a programmed or piloted path, while solar panels replenish the batteries for sensors and communications. Data are transmitted to shore via satellite and pilots can control the wave gliders from any device with an Internet connection. 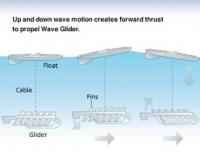 Two Arctic wave gliders were deployed from July 30-Sept 23, 2011 in the Beaufort Sea.