Alex DeRobertis is a fisheries biologist at the Alaska Fisheries Science Center's RACE program, where, he conducts and helps to improve methods of acoustic-trawl surveys of fish in Alaska to help manage commercial fisheries.  As part of the Saildrone 2016 Team, Alex is the lead of the fisheries acoustic work.

What is your job? I’m a fisheries biologist at the Alaska Fisheries Science Center in Seattle, Washington.The group I work in conducts acoustic-trawl surveys of fish in Alaska to help manage commercial fisheries. I help conduct these surveys and do research to improve the methods used in surveys. It is challenging and interesting work. I have been lucky enough to interact with a wide variety of interesting colleagues, and work with a wide of platforms ranging from inflatable boats to icebreakers, buoys, moorings on the seafloor, and now Saildrone.

What is your role with ITAE?  I’m working with a very talented team (ITAE, Saildrone, Simrad) to integrate a low-power echosounder or fishfinder on the Saildrone autonomous vehicle.  These devices, which are widely used on fishing vessels, allow us to ‘see’ what is beneath the ocean surface by emitting sound pulses into the water and measuring the faint echoes from fish and plankton. In a separate project, we had been working to develop miniaturized low-power scientific echosounders to measure the abundance of pollock from moorings mounted on the seafloor.   We deployed prototype instruments for the first time last spring.  At the same time, the ITAE team conducted a successful Saildrone mission in the Bering Sea.  We realized that Saildrone would make a great echosounder platform, and we have since assembled a team to integrate these two technologies over the last year. We are now conducting a series of tests to evaluate how well this device works on the Saildrone.  I’ll be out at sea in July following the Saildrone with the NOAA Ship Oscar Dyson to test how measurements from ship and Saildrone compare.  We are trying to understand both the advantages and limitations of unmanned vehicles as platforms for acoustic measurement of the abundance of fish and plankton. We are optimistic that there is much to be learned from combining these two technologies to make observations at times and places that would otherwise not be possi

How did you first become interested in what you do?  I can’t quite remember when or how, but at some point early in my childhood I was struck by the realization that the planet is mostly covered with water, not land. The planet should really be called ‘Ocean’, not ‘Earth’, and this made an impression on me.I followed up by learning more about ocean science when I had the opportunity, and now get to do it for a living.This project touches on many of my interests (underwater acoustics, fish surveys, technology development, and sailing), and has really been a lot of fun 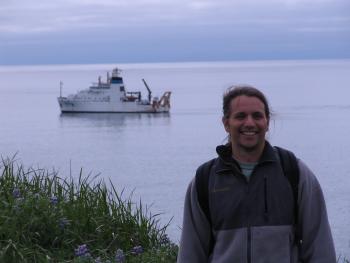 Alex DeRobertis in the Pribilof Islands 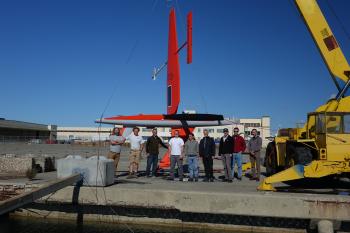 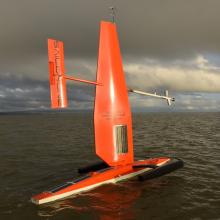 Team Saildrone 2016
In 2016, Team Saildrone is comprised of 15 engineers and scientists representing six research groups within NOAA/JISAO and three non-federal...