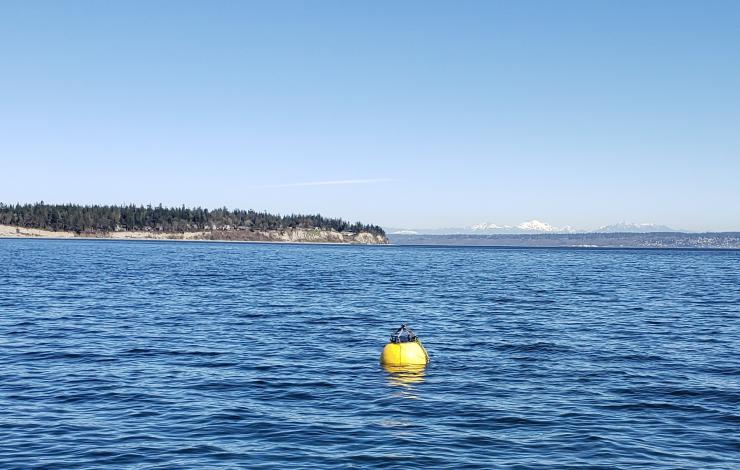 After 8 months of sitting on the seafloor, PMEL’s latest engineering development, the Flotation Controllable Ocean Mooring (FCOM) system successfully resurfaced in July. Over the last two years, PMEL has been developing a profiling mooring for use in Arctic regions that submerges when ice arrives in the fall and refloats in the spring after ice retreat. The FCOM system has a surface float that is anchored to the ocean floor, and includes a Prawler that moves up and down the mooring line collecting profiles of temperature, salinity, chlorophyll, and dissolved oxygen. This innovation will provide real-time information of the full water column during the entire open water (sea ice free) season.

The Chukchi Sea is an ice-driven system. Collecting data during the spring and fall is crucial for monitoring ecosystem production and generating ice forecasts. Data collection during spring and fall is difficult as there are few vessels in the region during those times, and moorings must be placed near the seafloor to avoid ice keels which prevents real time data return on the status of the full water column. Prior to FCOMs, surface floats could only sample for a short period because deployment and recovery were dependent upon the tight scheduling of research vessels. This mooring addresses these long-standing science gaps.

The mooring was originally deployed from the R/V Ocean Starr in spring of 2019 in the Chukchi Sea with pre-programmed dates to sink and resurface. It sank in October 2019, resurfaced in July 2020 and will be recovered in September. The next version of FCOM will be outfitted with a hydrophone and ice-detection algorithms so that it can resurface after ice retreats without having a pre-programmed date. Ultimately, the FCOM with a Prawler is intended to be integrated into NOAA’s Arctic observing system.