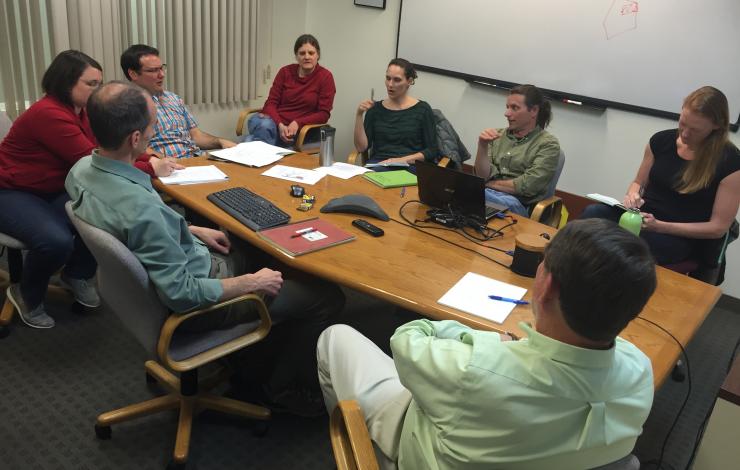 Engineers and scientists of the 2016 Saildrone Team discussing the first phases of the summer mission in the Bering Sea.

Congratulations to all involved with the 2016 Saildrone missions on receiving the Department of Commence Bronze Award and to Susie Snyder for receiving the NOAA Distinguished Career Award.

NOAA’s PMEL and Alaska Fisheries Science Center were awarded the Bronze Medal for “strengthening NMSF-OAR collaborations through the pioneering use of a Saildrone for next-generation ecosystem surveys in the Bering Sea”.

In 2016, the team successfully conducted the first ecosystem study using two Saildrones.  The mission combined both physical and biological oceanography to seek out new ways to supplement traditional vessel-based research. The Saildrones each traveled almost 3,000 nautical miles in the 101 day mission testing innovative technologies, including a specially developed echo sounder and a modified whale acoustic hydrophone. Collectively, the oceanographic, meteorological, and fisheries measurements provided unique and groundbreaking insights to understanding the economically and culturally important ecosystem in the Bering Sea.

The DOC Bronze Award is the highest honor award granted by the Under Secretary of Commerce for Oceans and Atmosphere, which recognizes superior performance characterized by outstanding or significant contributions, which have increased the efficiency and effectiveness of NOAA.

Susie Snyder was also awarded The Distinguished Career Award for her “continued efforts in improving budgetary policies and procedures relating to memorandum of agreements and reimbursable funds throughout 30 years of service to NOAA”. This award honors contributions on a sustained basis — a body of work — rather than a single, defined accomplishment.  This award also recognizes significant accomplishments across all NOAA program areas and functions that have resulted in long- term benefits to the bureau’s mission and strategic goals.