Home / Monitoring Change in the Arctic

Monitoring Change in the Arctic 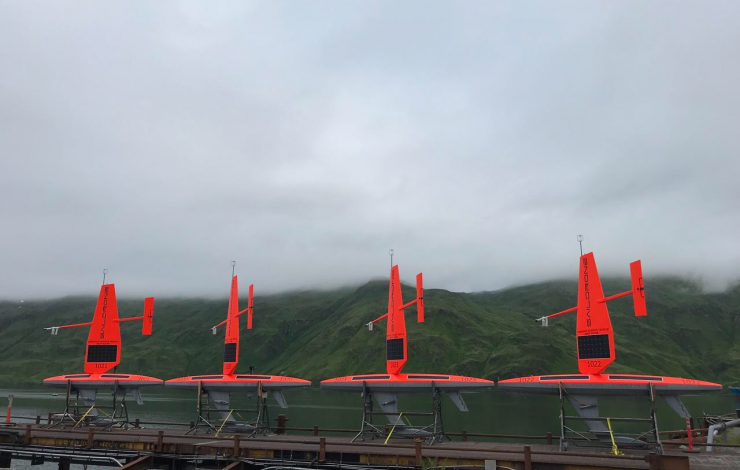 Over the last week, Saildrone Inc. and NOAA have launched the first batch of saildrones in Alaska and the Washington coast to enhance our understanding of fisheries, ocean acidification and climate science.

Four of these saildrones launched from Dutch Harbor, Alaska this past weekend and will make their way northward, surveying more than 20,000 miles through Bering Strait and into the Arctic Ocean to measure atmospheric and surface ocean conditions, carbon dioxide in the ocean, and the abundance of Arctic cod.  Arctic cod is a key component of the Arctic marine ecosystem as a food source for seabirds, ringed seals, narwhals, belugas and other fish. These two missions will gather measurements to identify ongoing changes to the Arctic ecosystem and how changes may affect the food-chain as well as large-scale climate and weather systems.

Last year was the first time the drones journeyed through the Bering Strait into the Arctic with a newly adapted system to measure carbon dioxide concentrations. Jessica Cross, NOAA Oceanographer at PMEL, continues to use saildrones to study how the Arctic Ocean is absorbing carbon dioxide to help improve weather and climate forecasting and our understanding of ocean acidification in these critical ecosystem areas.

Alex De Robertis, NOAA Fisheries Biologist with Alaska Fisheries Science Center, is mapping fish with sound to determine the amount and distribution of Arctic cod. Two drones will survey the same remote locations as previous ship-based surveys in hopes of demystifying the story of Arctic cod as temperatures and ice cover change in the Arctic. “We are trying to unravel the puzzle of what happens to the young Arctic cod that are so abundant in the summer on the Chukchi shelf,” says De Robertis. “There are many young-of the year Arctic cod in this area, but comparatively few adults. They either move to other areas or don’t survive the winter. What is their fate?”

These two missions will continue to further demonstrate the operation of these platforms at high-latitudes through the first fully autonomous acoustic fish survey and field tests of an updated carbon dioxide system that was re-designed to address challenges observed during the 2017 mission.

NOAA and Saildrone, Inc. are embarking on the fifth year of collaboration and novel data collection using saildrones to better understand how changes in the ocean are affecting weather, climate, fisheries and marine mammals.

Read more about all the NOAA Saildrone missions this summer here: http://www.noaa.gov/stories/flotilla-of-saildrones-deploy-to-artic-and-pacific-for-earth-science-missions

Follow along with the Arctic missions on this blog: https://www.pmel.noaa.gov/itae/follow-saildrone-2018

Learn more about what we did in previous Alaska surveys: