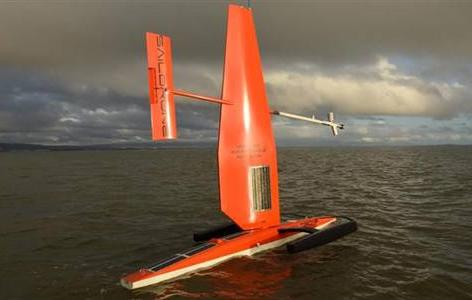 On April 22, two autonomous surface vehicles equipped with meteorological and oceanographic sensors will be released for the first time in the Bering Sea by NOAA’s Office of Oceanic and Atmospheric Research Pacific Marine Environmental Laboratory (PMEL).

Saildrones have the capacity to increase observational infrastructure in remote and hostile polar regions where ship time and human labor is costly and potentially hazardous. The ongoing development of Saildrones is a collaborative effort of researchers at PMEL, the Joint Institute for the Study of Atmosphere and Ocean (JISAO) at the University of Washington, the University of Alaska Fairbanks, and Saildrone Inc.

The wind- and solar-powered Saildrone incorporates the principles of sailing and scientific research with a nearly 20 foot high carbon-fiber wing that speeds through the waters with a suite of high resolution sensors. Compared to other remotely operated vehicles, these autonomous surface vehicles can carry over 200 pounds of instrumentation, travel at speeds up to 16 mph, and are quickly maneuverable. There is also no need to ‘drive’ or continuously monitor Saildrones. Like a ship with a set course, a Saildrone will continue on its path while continuously taking measurements, notifying on-call engineers of potential dangers via phone.

For the past year, scientists and engineers have focused on successfully developing the technology to operate in colder waters while obtaining quality data. The April deployment in the Bering Sea will focus on gathering and verifying that data collected are accurate enough for NOAA research and climate studies. By 2016, researchers hope to be north of the Bering Sea and entering Arctic waters.

PMEL researchers and Saildrone Inc. engineers have incorporated a suite of sensors into the Saildrone that include wind, air temperature and humidity, barometer, ocean surface temperature, water temperature, salinity, dissolved oxygen, and fluorescence. Pending a successful mission, the researchers and engineers are working on additional technologies, such as an acoustic fish finder to examine fish populations and a carbon dioxide-methane sensor to measure gas exchange between the air and water.

“Our ultimate goal using Saildrones is to understand the Arctic ecosystem at the water surface and throughout the water column,” said Calvin Mordy, Ph.D., a lead scientist on the project from JISAO.

Studies of the Bering Sea and Arctic waters are conducted mostly with ships. However, shortcomings of research vessels include their cost, limited range of observations, and seasonal measurements. The use of Saildrones in colder waters could allow scientists to enhance ship time, expand their range of measurements in the ocean, and continue to monitor through the entire year. These air and water measurements can be used to better understand warming temperatures, decreasing sea ice, and ocean acidification in an area that is not only a productive ecosystem, but also a valuable fishery for salmon, king crab, and Walleye pollock.

While Saildrones are rugged instruments that have been tested in the waters of San Francisco and other more temperate waters, the Bering Sea presents unique challenges. Strong currents around Alaska can make steering difficult, while limited sunshine may affect some of the solar-powered instruments. The most unique challenge of the Saildrone will be navigating through a potential sea of jellyfish. In large enough numbers, the jellyfish can clog the water intake system that allows the suite of instruments to take measurements.

After the initial testing, the two Saildrones will spend the next couple weeks mirroring the NOAA ship Oscar Dyson and testing validity of the data sets during regular operations on the M2 Biophysical Mooring in the southeastern Bering Sea . Once these comparisons are complete the autonomous surface vehicles will continue solo, heading northward in search of sea ice until July, when they will be retrieved from Nome, Alaska. A successful deployment of Saildrones into the Bering Strait would be symbolic for the potential of these autonomous surface vehicles to survey waters from pole to pole.