For the transport calculations, only the segments of missions spanning the distance between Rossel and Gizo are considered. A mission includes between 1 to 4 cross-sections across the mouth of the Solomon Sea. In the text file above, these sections are labels with “a, b, c, d” after the mission name. Both northern and southern tracks are included in the time-series. 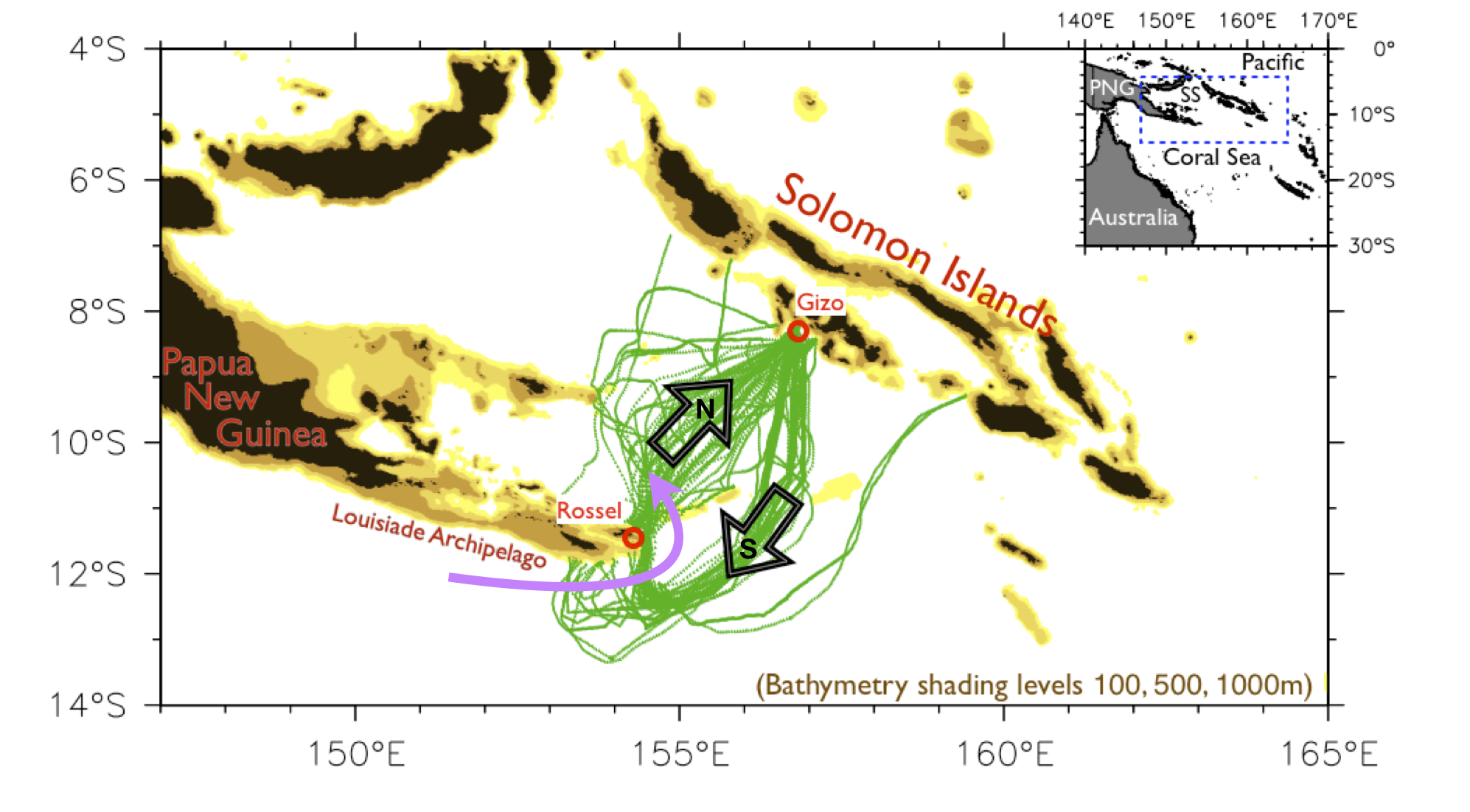 Fig.1: Bathymetric map of the Solomon Sea (shading levels at lower right) showing the near-continuous shallow reefs from 5°S to 10°S on the Solomon Island side, and extending to Rossel Island on the Papua New Guinea side. These archipelagos are effective barriers to ocean circulation, so the glider Gizo-Rossel transects sample the whole transport.  Red circles marked “Gizo” and “Rossel” show the section endpoints.  Green dots show individual glider dives and the separated southern (westbound) and northern (eastbound) tracks, where the overlaid black arrows show the track direction. This track separation is required because the western boundary current entering the Solomon Sea from the southwest (pink arrow) is very strong. The westbound glider route stays offshore so the glider enters this current sufficiently upstream to reach Rossel. The small inset map shows the location of the Solomon Sea (“SS”) in the southwest Pacific.

The transport for each section is computed as the coast-to-coast integral of the absolute cross-track geostrophic velocity, obtained from the glider-measured temperature, salinity and vertically-averaged velocity. Earlier missions measured transport to 700 m, later missions (since mid-2013) to 1000 m (Fig. 2). Data from some of the more recent missions is not yet quality-controlled and transport estimates are only preliminary.

Fig.2: Time series of coast-to-coast volume transport Q (Sv) through the Solomon Sea. Three depth ranges are shown 0-200m (purple), 0-700m (green), and 0-1000m (blue). Sampling to 700m began in 2008, to 1000m in 2013. Values at right give the mean transport for each case. Dots show individual section values and are noisy. Smooth curves show “low-frequency variability”, defined as the sum of the average annual cycle plus the anomalies from this smoothed by a 5-month triangle filter. Gray symbols along the time axis show the date and track (northern or southern) for each section, with stars indicating real time data that has not yet been quality-controlled.

A low-pass monthly time-series represents a smoothed version of the individual section transport time-series capturing its low-frequency variability (Fig.2). The low-pass transport is defined as the sum of the average annual cycle plus the anomalies from this smoothed by a 5-month triangle filter (see Kessler et al. 2019, Section 2.2 for details). Transport through the Solomon Sea varies strongly on ENSO timescales, with large transport occurring during El Niño events (Fig.3). The data files provide both the total and interannual anomaly of the low-pass transport time-series, evaluated monthly.

Fig.3: Interannual anomalies of coast-to-coast volume transport Q (Sv) through the Solomon Sea. Three depth ranges are shown: 0-200m (purple), 0-700m (green), and 0-1000m (blue). Sampling to 700m began in 2008, to 1000m in 2013. Interannual anomalies are defined as the time series minus its average annual cycle, smoothed with a 5-month triangle filter. Gray shading shows the Niño3.4 index (https://www.weather.gov/fwd/indices) representing the El Niño/La Niña conditions along the equator in the central Pacific. This index is similarly smoothed.