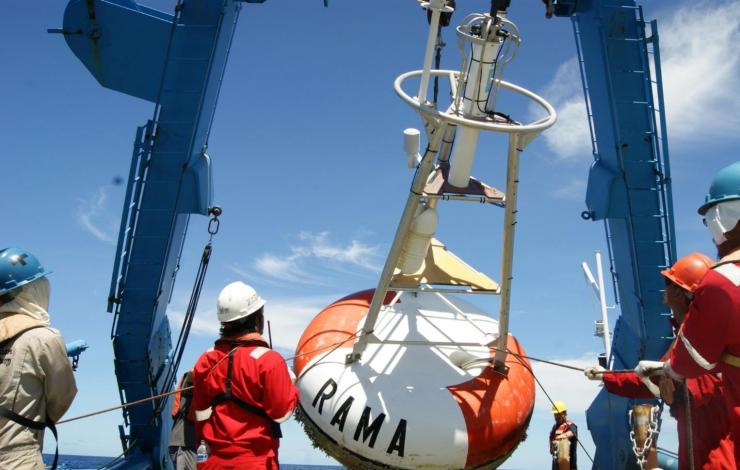 Buoys part of the Research Moored Array for African-Asian-Australian Monsoon Analysis and Prediction (RAMA) are designed to study the Indian Ocean’s role in the monsoons.

Rainfall declines may affect U.S. West Coast and parts of the East Coast

New research by NOAA and a visiting scientist from India shows that warming of the Indo-Pacific Ocean is altering rainfall patterns from the tropics to the United States, contributing to declines in rainfall on the United States west and east coasts.

In a study published this week in the journal Nature, researchers report a doubling in the size of a warm pool of water spanning the western Pacific and eastern Indian Ocean in recent years. This Indo-Pacific warm pool in what is already the warmest part of the global ocean is expanding each year by an area the size of California.

The expansion is changing a key weather and climate feature called the Madden Julian Oscillation, which is characterized by a band of rain clouds that move over the tropical ocean from the Seychelles off Africa toward India and into the Pacific Ocean, influencing everything from monsoons in India to heat waves and flooding in the United States.

The changes in the behavior of the MJO have brought a decline in rainfall to the central Pacific, the west and east coasts of the United States, north India, east Africa and the Yangtze basin in China. These same changes are causing an increase in rainfall over northern Australia, the Amazon basin, southwest Africa and Southeast Asia, researchers conclude.

“NOAA is part of coordinated international efforts to extend the range of accurate weather forecasts out to lead times of two to four weeks and the MJO is one of the most important keys to the success of this enterprise,” said Michael McPhaden, a senior scientist at NOAA’s Pacific Marine Environmental Lab and co-author of the study. “Our research provides a critical benchmark for determining which computer models to trust for extended range weather forecasting, based on their ability to simulate the observed behavior of the MJO in changing the climate.”

Though the entire Indo-Pacific Ocean has warmed, the warmest waters are over the west Pacific, creating a temperature contrast that drives moisture from the Indian Ocean to the west, enhancing cloud formation. This has changed the life cycle of the MJO. The length of time these clouds linger over the Indian Ocean has shrunk by four days from an average of 19 to 15 days. Over the west Pacific, the clouds now reside five more days. It is this change in the residence of MJO-driven clouds that is altering weather patterns around the globe, researchers found.

“Climate model simulations indicate that continued warming of the Indo-Pacific Ocean is highly likely, which may further intensify these changes in global rainfall patterns,” said Roxy Mathew Koll, lead author of the study with the Indian Institute of Tropical Meteorology who worked with McPhaden while visiting PMEL for the last year. “This means that we need to enhance our ocean observational arrays to monitor these changes accurately, and update our climate models to skillfully predict the challenges presented by a warming world.”

The study is part of a collaboration between NOAA and India’s Ministry of Earth Sciences, facilitated by the National Academy of Sciences with funding from NOAA’s Climate Program Office Climate Variability and Predictability Program. In addition to McPhaden, Chidong Zhang, also of NOAA PMEL, is a co-author of the research.