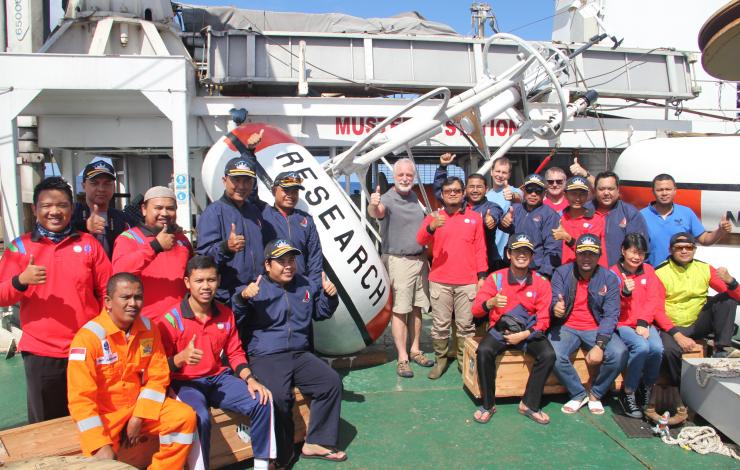 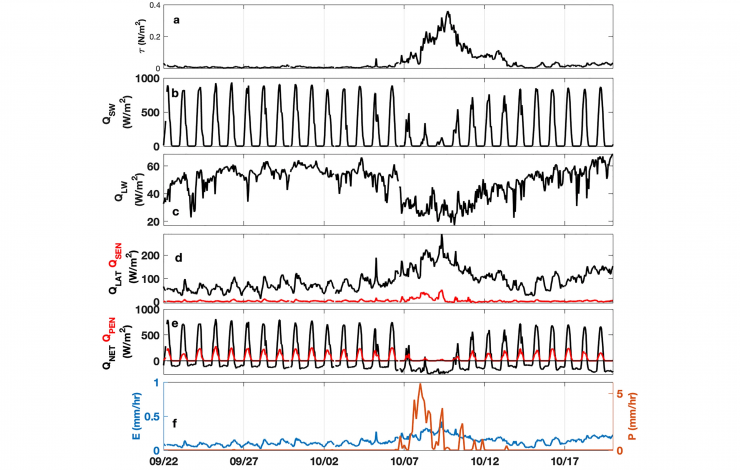 This graph shows the wind stress, heat flux, and evaporation/precipitation measured at the 15°N, 90°E RAMA mooring during the passage of cyclone Titli between September - October, 2018. The wind stress magnitude measured at the mooring increased from nearly zero to about 0.35 N m−2 and wind speed increased by 12 m s−1 in 4 days as the cyclone passed about 200 km to the southwest of the mooring on 9 October 2018 (part a). Click on image to enlarge and see the full graph.

The Bay of Bengal (BoB) is characterized by a shallow (∼10–20 m deep) fresh layer associated with 40–60 m deep warm near-surface layer during the post-monsoon season (October–November). We use hourly observations from a moored buoy at 15°N, 90°E along with satellite and ocean analysis data sets to understand the evolution of the near-surface layer during the passage of two category-3 cyclonic storms: Cyclone Titli (7–11 October 2018) and cyclone Gaja (10–15 November 2018). The mooring was ∼200 km away to the right of the two cyclone tracks. A 15 day (22 September–7 October) break in the Indian summer monsoon resulted in clear skies, calm winds, and sea surface temperature warming (SST) by 2.8°C before Titli. During Titli, near-surface thermal stratification restricted vertical mixing to 20 m depth and limited SST cooling at the mooring. During passage of cyclone Gaja, fresh Irrawaddy River water associated with a subsurface warm layer was advected to the mooring by mesoscale eddy flow. Cyclone winds could not break through the near-surface density stratification associated with this river water. Shear associated with near-inertial currents led to delayed mixed layer deepening... more