El Niño—Spanish for the child—is the name climate scientists have given the occasional periods of Pacific Ocean warming that play havoc with global weather patterns. For example, El Niño is known to intensify winter storms for residents of the West Coast, Gulf states, and southeast United States. El Niño also dampens Atlantic hurricane formation and can increase the number of Pacific hurricanes.

The coming and going of El Niño and disruption of global weather patterns have broad consequences for agriculture, energy consumption, and public safety. Some scientists have proposed that El Niño and its consequences might be intensifying due to global warming. The strong El Niño events of 1982/1983 and 1997/1998 support this idea.

However, a new NOAA-funded study shows that the 1918/1919 El Niño was one of the strongest of the 20th century, a finding counter to earlier analyses that viewed it as weak. This research could ultimately lead to a better understanding of how El Niño events impact weather in the United States and globally. It also suggests a possible link between El Niño and the 1918 flu pandemic. NOAA's Climate Program Office funded the study.

Led by Benjamin Giese, Ph.D., at Texas A&M University, the research team relied on a newly available atmospheric circulation dataset covering 1908 through 1958 to draw a more complete picture of the 1918/1919 El Niño. During World War I, ocean and atmospheric observations were sparse. The lack of direct observations has hampered understanding of the 1918/1919 El Niño.

The new atmospheric dataset, produced by NOAA and University of Colorado scientists through the 20th Century Reanalysis Project, [https://www.esrl.noaa.gov/psd/data/20thC_Rean/] filled in missing atmospheric data needed to produce a computer model of ocean conditions for that time period.

"What people have been doing to look at past El Niños is to use very sparse datasets and extrapolate based on patterns we know about during recent years," Giese explains. "But those patterns can change."

The team discovered that the pattern of the 1918/1919 El Niño was quite different than those observed in recent years. It was strong in the central Pacific but not along the South American coast. Since most of the observations in 1918 were along the coast, those observations missed the region of greatest warming.

The study raises questions about our understanding of El Niño and climate change. The results from the scientific team's "hindcast" portray El Niño events as stronger at the beginning and end of the 20th century with weaker events in the middle. The scientists say that their method could be applied to other El Niño events for which observed measurements were sparse.

The scientists also noted that the 1918/1919 El Niños central Pacific location links it more closely to drought in India. A severe drought took place in India in 1918, as the monsoon rains failed to develop that summer. The drought coincided with a flu pandemic that was sweeping the globe at that time – with tragic results. The influenza pandemic killed an estimated 18 million people in India. Globally, the 1918 pandemic is thought to have claimed about 50 million lives.

"1918 was one of the worst droughts of the 20th century in India. There was famine and a lack of potable water, thus a compromised population," says Giese. "It is clear that climate played a role in the mortality of peope in India. This is an example of how climate can impact human health. I think it raises intriguing questions."

Co-authors include Gilbert Compo, Prashant Sardeshmukh, and Jeffrey Whitaker of NOAA's Earth System Research Laboratory; Niall Slowey and Sulagna Ray of Texas A&M University; and James Carton of the University of Maryland. Compo and Sardeshmukh are also affiliated with CIRES, the Cooperative Institute for Research in Environmental Sciences, a joint institute of the University of Colorado at Boulder and NOAA.

Influenza patients during the 1918 flu pandemic in Iowa. [Credit: Office of the Public Health Service Historian] from https://www.cdc.gov/flu/about/
qa/1918flupandemic.htm 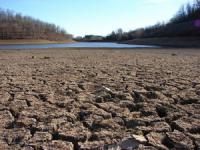