What's going on with the Polar Vortex?

What's going on with the Polar Vortex?

PMEL's Dr. Jim Overland explains how the warm Arctic relates to the extreme cold experienced by the U.S. in January 2014

What is the Polar Vortex?

Is there a connection between the polar vortex that is occurring across parts of the country and climate change?

In the last five years, we’ve seen the jet stream take on more a wavy shape (left hand map below) instead of the more typical nice oval around the North Pole (right hand map below). This waviness is leading to colder weather down in the eastern U.S. and eastern Asia. Whether this is normal randomness or related to the significant climate changes occurring in the Arctic is not entirely clear, especially when considering individual events, but less sea ice and snow cover in the Arctic and relatively warmer Arctic air temperatures at the end of autumn suggest a more wavy pattern to the jet stream and more variability between the straight and wavy pattern.

This previous fall and the major cold event in early January show such variability. The connection between the Arctic warming trend and more severe weather in the mid-latitudes is an active area of research.

What is going on now?

The jet stream for January 6, 2014 (pale blue in left hand map) follows a wavy pattern over the whole Northern Hemisphere, and the path of the jet stream is out of the north over the central U.S., bringing cold air southward from the Arctic and producing record cold temperatures for the eastern half of the U.S.. 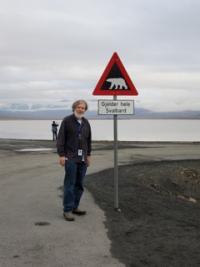